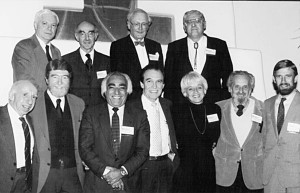 The origin of the AHA Council on Epidemiology and Prevention, an organization seminal to the history of CVD epidemiology and prevention research, lay in the ‘purity’ of motivation of the investigators and their questions but also in their early naiveté in, and need for, epidemiological methods. Only later was a political acumen mustered in a struggle for group identity. The pioneer U.S. investigators in CVD prevention had a common desire to share ideas, improve methods, and stimulate research in their new field. But they were soon frustrated by the unfamiliarity with design, analysis and field methods of the surveys and trials they saw were necessary. These inadequacies were reflected in their earliest meetings and formal activities. It may be that it was as much the need for valid and common criteria and methods for their new science that brought them together as the scientific questions themselves.

Soon after the AHA became a public voluntary organization in 1948, the AHA Section on Public Health became the Council on Community Service and Education and promptly established a Research Committee, under the chairmanship first of Paul Dudley White, next of Ancel Keys, then of Herman Hilleboe. Its functions were to review grant applications and make recommendations for support of epidemiological studies within the national research budget of the AHA, and to stimulate and review public health methods and initiatives in cardiovascular diseases.

In collaboration with the new National Heart Institute (NHI), this committee promptly organized a series of crucial meetings on CVD epidemiological concepts and methods, held in succession: the Arden House Conference in 1956, the Brookline Conference, in 1957; and the Princeton Conference in 1959. These conferences in turn become major stimuli to further AHA activity and organization around epidemiological interests and methods.

The AHA Council on Community Service and Education then established in 1958 a Committee on Epidemiological Studies to forward the activities of its epidemiologist members. The January 1960 meeting of the committee was especially significant in this history, since a thorough review of the status of CVD epidemiology was made by Chairman Oglesby Paul and by AHA Medical Director, George Wakerlin. They claimed organizational precedent in the early AHA Department of Public Health and concluded by proposing Council status, indicating that from its inception the AHA had “included individuals interested in public health and epidemiology…”

A Committee motion was subsequently acted on by the Central Committee at the national level of AHA, based on a memorandum from new officers, Felix Moore, chairman of the Committee on Epidemiological Studies, and Oglesby Paul, president of the AHA, addressed to the executive committees of all AHA Scientific Councils, dated March 22, 1961. The following is an excerpt from that landmark document:

Creation of a Council on Epidemiology

“The primary objective of such a Council would be to provide a place within the American Heart Association structure for those professional groups concerned with the study of populations; such as professionals as physicians, epidemiologists, statisticians, social scientists, sociologists, physical and social anthropologists, psychologists and geneticists. It would also provide a place for persons who have a major interest in some other Council, but have a strong secondary interest in population studies.”

Despite a largely favorable poll result among the Councils for Council status for epidemiology, AHA president Carleton Ernstene, with strong support Louis Katz, expressed opposition to a separate status for epidemiology out of a purported concern that it would “attract away” people working in the field of cardiovascular epidemiology. This resulted in the entire matter of epidemiology being referred back to the Central Committee for further deliberation.

On these shoals, the AHA Council ship for epidemiology foundered for three long years.

Meetings of the Committee on Epidemiological Studies continued throughout this long period of AHA bureaucratic bandying, meetings that proved crucial to eventual status as a formal scientific council. In particular, the annual scientific conferences on CVD epidemiology provided the intellectual glue that held together the epidemiologists. These conferences were developed by Felix Moore and Oglesby Paul as chairpersons; Dr. Paul provided critical leadership in organization and obtaining private funding for early conferences. The first Chicago conference in 1960 was also critical to “bonding” among the group. It established a tradition of presenting work in progress along with special reviews and lectures by senior members.

Meanwhile, the AHA Committee on Epidemiological Studies continued to meet and to plan. At its May 1961 meeting, which was chaired by Felix Moore, Fred Epstein reported on deliberations of the relatively new CVD section of WHO in Geneva, which neatly paralleled the AHA focus on comparable methodology for epidemiological studies. These joint activities led not only to major steps in methodology but also to the greater formal organization of CVD epidemiology and to greater purpose and direction for that organization.

In February, 1963 meeting, Oglesby Paul, as chairman of the Committee on Epidemiological Studies, announced that a scientific session on epidemiology was planned for the upcoming national AHA Scientific Sessions to be held jointly with the Council on Arteriosclerosis, to provide a state-of-the-art summary of the knowledge about atherosclerosis gained through epidemiology along with its pathological, laboratory, and physiological aspects. That first major session on CVD epidemiology at the AHA Annual Scientific Sessions became another milestone in the history of the Council and of the profession. This was a full decade after such a major review of CVD epidemiology had already occurred at the World Congress of Cardiology in Washington, D.C. in fall 1954, under the international organizational vision and enterprise of Paul White and Ancel Keys.

The sustained AHA organizational inertia was at long last overcome in 1964 with the joint action of Oglesby Paul as head of the Committee on Epidemiological Studies and Carleton Chapman, AHA President. At the September 26, 1964 meeting of the Executive Committee of the AHA Board of Directors it was duly voted to “adopt the rules and regulations of the Council on Epidemiology as modified.” Oglesby Paul was appointed chairman of the new Council, a final action that formally created the new AHA Council on Epidemiology. [The big dogs got it done.]

The official AHA announcement came in the Council Letter, Summer 1964 issue. At that time, Leonard Cook, AHA statistician, received a “permanent appointment” to staff the council on Epidemiology, which he held through 2004, for 40 years!

The epidemiological group met as a formal council at the October 23, 1964 AHA Annual Scientific Sessions in Atlantic City, NJ, approved its rules and regulations, and set dues at $5 for fellows and $2 for members. Its recently published report in Circulation on criteria and methods and an accompanying editorial were acknowledged. The AHA Pooling Project was under way with its first funding proposal sent off to the NHI. The CVD Newsletter was well established. The first budget request was submitted (for $9,215!) to support two meetings of a 15-person executive committee and two meetings of a 12-person criteria subcommittee as well as working groups, data collection and processing, an annual conference, and the newsletter. An invitation went out promptly to a distinguished group of leaders in cardiovascular medicine to “grandfather” them into the new council.

Thus, the new Council’s activities went on in a seamless fashion from past meetings of the Committee on Epidemiological Studies. The Council had gotten off to a strong start. The AHA Council on Epidemiology, with “and Prevention” added to its name and purpose, has since grown in size and influence. Its executive group carries out the Council’s affairs, coordinates the Lake Tahoe Ten-Day Seminar in CVD Epidemiology, publishes a segment in the AHA Council Newsletter, and organizes annual scientific sessions integral to academic CVD epidemiology and to the practice of preventive cardiology.

The parent AHA, along with its committees and other scientific councils, laid the groundwork for research, practice, public recommendations on health and lifestyle, and national policy on health issues at the heart of CVD epidemiology, including diet, smoking, hypertension, physical activity, and the general promotion of health. It has been influential beyond national boundaries, providing a model for the scientific councils established in 1996 by the International Society of Cardiology (now the World Health Federation) and in 1976 by the European Society of Cardiology (Henry Blackburn)