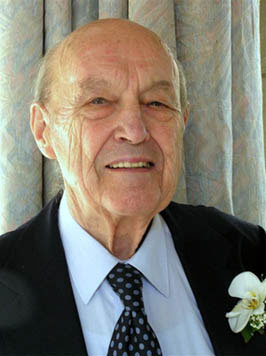 Professor JV Joossens was born in Antwerp, February 12, 1915. The average life expectancy was then 55 years. His father died at age 51 and his mother at 67 years. His sister was 33 years at death. She was the victim of a stray bomb V1. His brother reached the age of 90 years. Perhaps this family history explains some of the reasoning of Prof Joossens for the study of life expectancy and its predictors.

Joossens professor graduated a medical doctor in 1939: as a student he finished four years with “great distinction” and three times with the “greatest distinction”. He was assistant to Prof. Van Goidsenoven: 1940-46. Afterwards he worked as an internist in Antwerp: St Luke Clinic Ekeren: to 1954. Then he became a lecturer at the Faculty of Medicine and head of the Central Clinical Laboratory. He became head of the Division of Cardiology from 1955 to 1980, full professor from 1958 till 1984, the year that he was permitted to retire. He was also founder and head of Epidemiology: School of Public Health from 1965 to 1984. From 1971 to 1973 he was chairman of the Belgian Society of Cardiology.

Time prevents me from giving a full list of the many other responsibilities he has taken.

Mr. Herwig Deumes, team leader of the “Royal Academy of Medicine of Belgium” asked me to share this message.

“Because of his great scientific achievements, Professor Joossens by the Royal Academy of Medicine of Belgium in 1956 was elected a corresponding member. In 1970 he was promoted to titular member. He was a member of the board from 1982 to 1984, when he was elected the members as chairman. After his presidency he was a founding member and chairman of the Standing Committee on Nutrition ‘efforts to improve nutrition in Belgium. In 2008, Prof. Joseph Joossens promoted to honorary member of the Academy of Medicine.” So there the notification by the Academy.

His most special message brought Prof. Joossens in a communication to the Royal Academy of Medicine of Belgium in 1996. It read as follows: “The changes in mortality and life expectancy, as we see since 1960, correlated with changes in lifestyle, consumption of salt, fruits, vegetables, saturated fats, and smoking habits”.

A recent publication is without prejudice to the need for salt restriction. The recent European Society of Cardiology cookbook recommends salt consumption of up to 2 grams per day. It is obvious that the current computer software is easy to expand the number of subgroups. With a little luck people can always find an original solution.

A generation of doctors know Prof Joossens as teacher, supervisor, and head of Cardiology. He may be regarded as the founder of the service. He surrounded himself with excellent staff: Prof. Hilaire De Geest who would succeed him as head of department, the late Prof. Hugo Kesteloot, late Professor Toon Amery. You’ll notice that the selection by Prof Joossens not focused on the most docile character but on personalities with ambition, will power and responsibility. The number of staff rose at a logarithmic scale.

New staff members joined the Cardiology Group. They contributed to what became the birthplace of modern cardiology: cardiac surgery, heart catheterization, electro cardiology. The role of the Cardiology department regarding thrombolysis has been a leader: students of Prof Joossens like Desirez Collen, Jan Piessens, Frans Van de Werf played a major role.

We must recognize firm steering is needed for a university medical service. That control resulted in an annual reception at his home. There we discovered a JVJ in his special room with beautiful orchids. The cuisine was excellent according to his strict rules. Traditionally there was a kind of quiz where the assistants and their partners separately answered a number of questions. We thought that this is just a game. Now I suspect that this was a pre-selection for future staff.

I saw Prof. Joossens the last time on his 95th birthday. His son Jack and granddaughters were present.

I think that Professor JVJ me then no longer recognized. However, he flipped with great attention in the thesis of Marie granddaughter. This proves that even then his academic mind was still present.

Professor JV Joossens was a worthy representative of the Universitas Catholica Lovaniensis, seat of wisdom for the world.