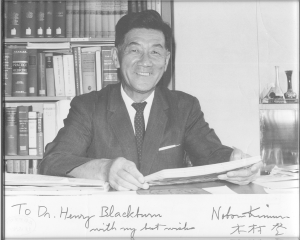 Professor Noboru Kimura was one of the first academic clinicians anywhere to look at causes of heart disease and risk in populations outside the clinic. And he was one of Ancel Keys’s first collaborators on the idea of population comparisons. Soon after his death I was given the opportunity to eulogize him before an audience of Japanese cardiological colleagues in the first Kimura Lecture. I had the short introduction to follow translated into Japanese, which I then read falteringly, euphonically, in  Japanese:

Our colleague and friend, Noboru Kimura, was a pioneer in geographic pathology and in cardiac epidemiology. I saw him first on stage at the World Congress of Cardiology in Washington, D.C. in 1954, with Ancel Keys, Paul White, and Gunnar Biorck, in their historic panel about population differences in cardiovascular risk and disease.

Professor Kimura was influential in the field of prevention from the outset because of his independent studies of populations in Kyushu and then his collaborative researches in the Seven Countries Study. His influence has persisted through the training and exposure he provided countless young Japanese physicians about the distribution of cardiac diseases in natural populations and the potential for their prevention. It has persisted in the major enduring academic institutions and programs he built in southern Japan.

Today, in this first memorial lecture given in his name, we remember and acknowledge with great respect and admiration our colleague Nobu’s contributions. We remember and sorely miss his grace and warmth and careful attentions to us as his colleagues and friends.