In October 1975, at the behest of the NHLI, I was delegate to a small conference on “The Seven Cities Study,” a loose consortium of community interventions on health in Spain. I was put up at El Paular, having requested a weekend of quiet to write and to prepare myself. It was an ideal place for such contemplation; the silence was deafening.

We were introduced to the concepts and operating schemes of the Seven Communities, which included studies directed by old friends, Balaguer-Vintro in Barcelona and Raphael Carmena in Murcia. The first evening we were treated to an address by Sir Ernst Chain, the Spanish Nobel laureate biochemist, with whom  we  also had a pleasant lunch the following day. There, Sir Ernst (an Einstein look-alike) presented us with a charming irrelevance, his autographed image. 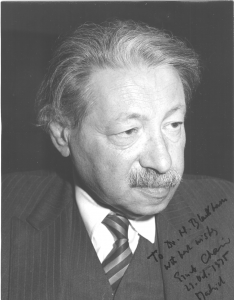 I wrote a report for Robert Ringler at NHLI summarizing each study and concluding that, “the Spanish Seven Cities group are moving forward in training, experience, and accomplishment.” Patronizingly, I suggested that, “Population studies involve a prolonged learning time and the Seven Cities members are at different phases of learning. Technical support, training, and exchange of personnel would be a useful and appropriate function for WHO and NHLI to forward these developments.”

During our time in Madrid we expected from one moment to another to be assisting at the wake of Generalissimo Franco. In fact, his health was the main topic of conversation whenever professional matters were left behind; he had clung to life for many months. Several of our Spanish colleagues were called into consultation at the Palace while we were there. To spread the responsibility thinly, the number of consultants was increased with each new Franco complication. On the day I left, 16 were in attendance!

The city itself was remarkably relaxed and, despite little evidence of the military, there was no terrorist activity. Of many colloquial jokes about the situation, the one I remember concerns the delegate from the crowd in mourning  before the Prado Palace who approached to touch the Generalissimo’s hand and to whisper in his ear: “I have come from the people to tell you goodbye.”

To which El Caudillo raised his head and whispered back,

“Oh, yes? Where are the people going?”