Investiture Ceremony of the Berenson Chair

Presentation of Henry Blackburn, M.D. U. of Minnesota

It is an honor and a delight to be a part of this distinguished occasion, along with Gerald Berenson, Joan, and their extended family and colleagues, in recognition of the family’s fine gift honoring Gerry’s leadership and unique career.

To begin, I ask your brief indulgence in an analogy to what is being recognized here today:

The Evolution of Jazz

I subscribe to a theory that jazz, the brilliant and unique American art form, “was a product of the rich cultural ambiance of New Orleans — and the pleasure-seeking lifestyle of its diverse peoples. Class differences and diverse neighborhoods were brought together through their music. New Orleans opera was joined by the sounds of Irish wakes, of funeral parades, Creole parlors, steamboat dances, low dives and upscale Garden District parties, proletarian picnics out at the lake, and, of course, Mardi Gras parades and balls. This deep musical culture, cutting across [and joining] classes, became the genome of Jazz.”1

“Jazz was born [here] in New Orleans, a place like nowhere else on earth, the first melting pot, assimilating French and Latin, Protestant and Catholic, black and white, in a raucous, hell-raisin’ community, forgiving in its counter-reformation Catholicism, accepting of the flaws of human nature, and taking place where the search for pleasure was a high art.”2

There will eventually be a point to all this Jazz, Gerry!

The theory goes that perhaps only such a milieu as New Orleans could have given birth to music so profound and moving, so epidemic and evolutionary as America’s Jazz.

The Evolution of a Career

Now, I would like to pose a parallel theory about the evolution of the innovative and joyful career of Gerald Berenson and of the Bogalusa Study, and now of the Tulane Center for Cardiovascular Health.

Perhaps it is only in such a rich cultural ambiance of diverse peoples, with the credibility of a natural leader in his own community, stimulated by dynamic changes in health and the social influences on them, and with the support of forward-thinking people and institutions, that such a brilliant and useful career as Gerald Berenson’s could have evolved.

Today, Gerry, your community once again, honors you as a pioneer and for the values you so effectively ply within that nourishing community.

The Body of Work

There are several noteworthy characteristics of Gerald Berenson’s contributions, other than their well-known scientific depth and balance. In at least 90 percent of his 700-odd publications, his is the guiding hand at the very end of the author list, putting his colleagues up front. This is the ultimate collegiality, the true mentoring, the prototypical collaborative teamwork — the ideal of academic leadership. This manner of research and management stimulates and enhances creativity. And, of course, it redounds eventually to the greater productivity and reputation of the institution. Despite this, such leadership is rarely found in academia.

The Bogalusa Study at its inception was far ahead of the wave in prevention research; it was among the first awarded an NIH SCOR, as a specialized center of research, and it pioneered in posing and testing the following, oh-so-simple but important propositions:

• that the common adult diseases, their metabolic and behavioral components, begin in childhood;

• that elevated risk is already identifiable during youth and tends to persist into adulthood;

• that effective prevention can and should begin in youth; and that it must include both medical, individual approaches and population-wide public health strategies.

Denis Burkitt spoke often of the critically needed priority for simple research, such as the study of healthy eating patterns and being active and not smoking. Today, our NIH and academic leaders tell us that we have already done our bit on this score. It is over. They now have “more important things to study” and to support, or so they say. There is nothing more important or more needing to be done than this simple research in prevention.

Gerald Berenson initiated the earliest studies on metabolic and behavioral risk factors and their evolution through adolescence and beyond (aren’t the Bogalusa kids on average about 40 years old now?). He studied trends over time in average risk levels and their related behaviors in children, and he pioneered health promotion programs in schools and whole communities. He provided the classic data on clustering of risk factors both in individual children and among susceptible populations. He and his team first elaborated the traditional risk factors in youth and then exposed many new ones such as homocysteine levels, LPa, insulin resistance, obesity, lipid subfractions, and specific genes. They were first to look at proteoglycans and mucopolysaccharides. They were among the first to relate risk factor levels to arterial findings at autopsy in young people and in animals. And Berenson and colleagues were early to recognize the powerful potential of preventing high risk in the first place, among kids and in vulnerable populations.

Gerald Berenson’s contributions as lead author are mainly seen in thoughtful reviews and editorials that give a broad view of the origins, mechanisms, and prevention of common diseases. They always raise the cry that these begin and progress actively during youth; they always call for vigorous participation of family, school, and community in their prevention; and they always show us the way.

The whole body of Gerald Berenson’s work displays an artful combination of all three beauties of biomedical research: bench, clinical, and epidemiological: in his conduct of superbly interlocking laboratory experiments, clinical trials, and population-wide surveys and interventions. Gerry is that most rare of investigators actually able to employ whatever discipline is appropriate to the stage of knowledge and whatever study design is appropriate to the question at hand. Full of curiosity about the current high-tech revolution in molecular biology, he, nevertheless, stays close to his young patients’ clinical issues, and he remains steadfast about the broader concept of “sick and well populations,” the powerful idea that most disease-prone phenotypes would not develop at all in a more favorable nutritional and hygienic milieu. (Prevention is as simple, yet as difficult, as that. Right Gerry?)

Today, the productivity of the Bogalusa Study is very much ongoing after more than 25 years. It is an academic gold mine. And it has been kept viable by unusual innovation and unequalled tenacity. (You won’t object to being labeled tenacious, will you, Gerry?) The Bogalusa Study is the prototype of successful community studies and health promotion programs among youth; its schemes are incorporated into current efforts around the globe. And it continues to provide the base, the data, and the model for many new activities of the unique Tulane Center for Cardiovascular Health.

We will hear from Gerry today about his vision for the future of the Center and the challenges that remain for preventing high risk in the first place. Surely, this new and permanent Berenson Chair in Preventive Cardiology will assure the Center’s ongoing and strong leadership. It will also help maintain the uniqueness of this Tulane enterprise, one that so happily combines the skills and warmth of good medicine with the efficiency and efficacy of health promotion in the whole population.

In closing, please allow me to return to my theory: that only in such a rich culture, among such diverse peoples, facing such real and common threats, having such great passions, all with the community support demonstrated here today, could such a remarkable career have evolved. And that, with such prescience and understanding, this career could only have evolved so fully in the remarkable person of Gerald Berenson.

Gerry, it is a joy to share this fine day for Tulane with you and your family and colleagues and to see anew the many fruits of your handiwork. Congratulations! 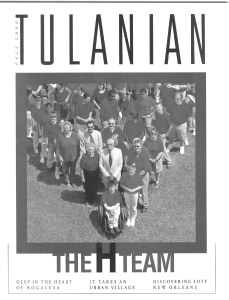