I attended the Sixth International Symposium on Atherosclerosis in Berlin as guest of the grand old man of German Cardiology, Gerhard Schettler. The Berlin Wall was the trip’s highlight.

The flight into Berlin from Hamburg at low altitude over the lovely quiet countryside produced no surprises. But the distinctly ugly and unbusy Berlin International Airport did. The second surprise was that late post-war West Berlin is physically such an uninteresting city. Almost no old buildings remain and the new have singularly uninspired architecture. Miles of shops, hotels, and cinemas are simply  kitsch. My Hotel, The Kempenski, proves to be the hotel in town.

I took a taxi from the airport directly to the Congress Center to attend the lipid metabolism sessions and there ran into delightful colleagues from around the world. The symposium is a first-rate meeting; the presentations were excellent as were discussions from the floor. Schettler is a gracious host. Tony Gotto is in evidence everywhere. Zbynek Pisa is here and presented me a copy of the newly published WHO Expert Committee Report on The Population Strategy of Coronary Heart Disease Prevention, for which I was rapporteur and Geoff Rose the chairman in Geneva last year.

Returning to the hotel wet and chilled, I settled into a hot sauna.  While chatting with a pleasant English chap, an attractive German woman entered, nude, gave us a slight smile of greeting, and proceeded to pin up her hair and lie on the bench below us quite unself-consciously. She then turned on a small reading lamp to study the bridge hands in her magazine. Subsequently, a young German couple entered. Within moments there was no self-consciousness with them either, only pleasant banter. Afterwards I replenished fluids lost in the sauna and then, back in my room, thoroughly jet-lagged but happy, I crashed.

At 3 a.m. this morning, wide awake, I drastically cut back my talk, after which I slept as if drugged until a German breakfast was brought in at 7 a.m.

My presentation seemed to be on the mark. Later, in a pleasant visit with Pekka Puska, he set me straight on the strength of his new organization and showed excitement over an innovative Italian-Finnish reversed diet experiment to determine whether “Finns become Italians” (cholesterol-wise) if they eat Italian, and vice versa. Ancel Keys could have precisely predicted the result 20 years ago.

Back to the hotel for another pleasant sauna, this time with Barry Lewis and Lars Wilhelmsen, during which we discussed Lars’s method of calculating attributable events and the rate effects of population shifts leftward in risk distributions. Evening dinner was pleasant with Kalevi Pyörälä and other Finnish friends plus Mario Mancini and Barry Lewis, over a good German meal of sauerkraut and röstl, salad, rolls, and mugs of beer.

The high point of the social program was Schettler’s reading from Mark Twain’s famous essay on “The Awful German Language.”

On my only free day in Berlin I am off for a small adventure on a tour bus to East Berlin. Large adventures are no longer my style and the prospect of walking alone through Checkpoint Charlie and down the streets of East Berlin seemed too somber.

En route, the Kurfuerstendamm is a blocks-long bustling collection of businesses with skyways, Minneapolis style. Our comfortable tour bus drives directly into the rising sun, bearing its dozen or so mixed passengers eastward, Belgians, Thais, and Yugoslavs. We were instructed to leave reading matter inside our bags so that we would not be searched and to carry none into East Berlin. We were warned as well not to take photographs at the border, which is considered a military zone. How strange that East Germany remains a society deathly afraid of ideas.

We just turned off Tempelhof, which must mean we are close to the old Tempelhof aerodrome still used as a military airport, smack downtown, the famed end station for the 1960s Berlin Airlift. A graffito reads “Yanks Out.” Another I particularly liked said, “Reagan, go back to your Caddles, meant to be saddles, I suppose.  At any rate, they want the old cowboy back on his range. Here we are, 35 years post-war and East Berlin still looks as I saw it in the early ’50s, with vast areas of rubble, a vehicle cemetery, and spaces overgrown with weeds. 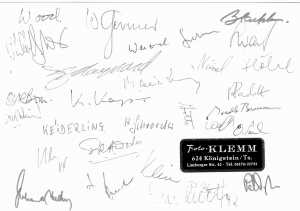 Find your autograph among signatories of the official photograph of the  6th International Symposium on Atherosclerosis, Berlin 1982.

Oh, my God, there is the wall! It is about 10-feet high with a bubble concrete overhang on the top, no barbed wire, and covered with graffiti in all sorts of languages.  Before us is the famous Checkpoint Charlie. The East German border officials with their red-starred caps stride across the square to a coffee shop. Signs read, “You are leaving the American sector,” in English, German, French, and Russian. I stow my Dictaphone to avoid suspicion.

All in the bus are very quiet. The Wall itself is chilling.

The border guards appear bored. Tourists hang around the checkpoint chatting, drinking Cokes, smoking cigarettes, taking photos though they are not supposed to. Nobody pays attention. A badly bombed-out building stands directly above the checkpoint, its gables inhabited only by pigeons.

Imagine, almost 40 years after the war, and this anachronism, The Wall, lives on!  It is the symbol of our world today, separate, divided, and hostile. {Now, almost 60 years after World War II, the Berlin wall is down and the world, according to Tom Friedman, is no longer divided but globalized and inter-connected, as symbolized by the  world-wide web.]

A 50-yard, no-mans-land stretches between West and East checkpoints. We pause at the  west point with its canned drinks and photographing activity. People walk along the wall on the west side inspecting the graffiti. The overhang is just enough that a person could not jump to the top and get an arm up, just enough to discourage an easy up and over that would require pole vaulting or a ladder or at least a gymnastic assist. A green open plot before the wall is studded with ugly anti-tank guards of crossed rails and is infested by myriad jackrabbits.

We arrive at a parking lot for tour buses where we are third in line through the chain. Segments of the wall visible between buildings are lined with charged wires. Secondary walls extending at right angles to other buildings contain broken glass mounted in concrete. Special street lamps are designed to throw their light onto this wretched four-acre plot at Checkpoint Charlie.

The East German guard, apparently finished with his coffee, comes out to address the bus ahead of us. They are surely no different mentally than the West Berlin guards, but somehow they look more glum, more threatening and reminiscent of “1984.” To a visiting socialist they might appear progressive, more intelligent, and less depraved than their Western counterparts. Clearly, beauty is in the attitude of the beholder.

A severe, unsmiling  but smartly dressed lady guard makes a thorough inspection of our bus, looking between rows and insisting that the toilet and the outside baggage compartments be opened for her viewing. Meanwhile other workers carry long poles tipped with mirrors, which they pass along the undercarriage.  Is all this checking done out of paranoia pure? Is it seeking real spies or contraband? I would guess that this farcical, exaggerated check on entry to East Berlin is to establish the routine so that it does not appear quite so ridiculous when the inspection is repeated on the way out, looking for stowaway defectors. Now we see people walking through the checkpoint. I was advised to do this alone if I really wanted to sense the oppressiveness of East Berlin and of Churchill’s Iron Curtain.

I elected to skip that experience and remained on the bus.