Cardiovascular Disease Survey Methods: WHO Technical Manual No. 56, WHO, Geneva, 1968 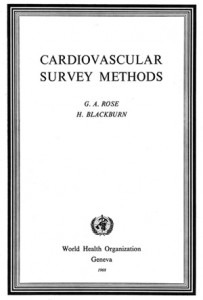 Rose and Blackburn, the book, as this primer of CVD epidemiological methods was soon labeled, began in earnest in late fall, 1964, during the dull gray period of the year when Geneva is covered by unrelenting fog. Rose and Blackburn, the colleagues, were clear about their assignment: to prepare in 10 days the first draft of a World Health Organization (WHO) technical monograph: Cardiovascular Disease Survey Methods.

Shut up in a cell of the old League of Nations buildings, furnished with two desks, two chairs, bare walls, and a view eastward on the perpetual fog over the lake, we worked with a staff of one bright, pale, English secretary. This monastic protocol remains even today the favored WHO method for producing expert reports. First, prepare the groundwork well, exchange manuscripts and correspondence over many months, assemble the experts in Geneva, then incarcerate them until they come up with a draft.

We worked well as a team; Geoffrey in the didactics, principles, and computations, I in the field methods, definitions, criteria, and detail. We overlapped comfortably in places. For example, Geoffrey took over methods in the sections on chest pain, smoking habit, and respiratory questionnaires, and I took over on principles of survey organization, operations, and recruitment. We edited each other’s drafts and soon mastered each other’s difficult handwriting. Rarely did I mark up his drafts. Geoffrey whittled away mightily and tactfully on mine, until eventually I came to acquire some of his parsimony of language. Later, a senior WHO reviewer of the monograph, Alex Burgess, remarked, for whatever good, that he had never found, save in classic poems, “so much information concentrated in such limited space.”

A major part of the effort of WHO Monograph Series No. 56, finally published in 1968, was a system of criteria and procedures for classifying electrocardiograms in population studies and trials. This was primarily my contribution, but Geoffrey and I had consulted often during its preparation and early application, and he was among the first to use it to compare coronary heart disease prevalence among populations. Aubrey Kagan, London physician on Sabbatical at WHO, early on dubbed the classification system, “Minnesota Code,” a label that has survived and that appropriately represents its genesis in Minnesota-based activities while avoiding other proprietary identities.

Another of Geoffrey’s contributions to the code was the use of lay coders, which we developed independently on each side of the Atlantic. In Geoffrey’s case, this came as a natural and logical pursuit. On our side, it happened more by serendipity, nurtured by the desperate necessity of coding thousands of records annually. I shall not divert here to the story in which my six- and seven-year-old daughters demonstrated to my satisfaction one summer that physicians need never more code volumes of electrocardiograms for population studies (Blackburn 1995).

Geoffrey Rose took on multiple roles in the development of standardized survey methods: the Rose Chest Pain Questionnaire modified the old Fletcher “Cough and Spit” Respiratory Questionnaire. He also studied the repeat variability of ECG coding, initiated lay coding and wider use of the code, and devised random zero sphygmomanometers to eliminate digit preference in blood pressure measurement. All were central contributions to CVD epidemiological methods, leading to more reliable classification of attributes and of events for studies in our field.

Life with Geoffrey before, during, and after writing Rose and Blackburn, was stimulating, and, on occasion, intimidating, at least for one who arrives at decisions and views in somewhat more roundabout ways than he. Geoff always asks the especially penetrating question, the one that goes to the crux of the matter or that punctures one’s balloon. For example, when I proposed long-term cohort monitoring in addition to cross-sectional surveys to detect community risk changes over time, he asked, “What will your cohort really represent of the community or of the original cohort after 10 years time?” Geoffrey is quick, indeed, to find the core of an issue.

Economy of expression derives, of course, from clarity of thought. Rose’s humility about these superior mental processes was manifest in the gentleness of his edits of my efforts on the WHO manual, but it was never more evident than in his response, in late 1990, to my comments after he gave the first Ancel Keys Lecture at the American Heart Association annual meeting. We were seated on tombstones in an old Confederate Army cemetery just outside the Dallas conference hall, discussing his lecture and mulling over our individual futures. I waxed effusive:

“Geoffrey, in your entire Keys lecture there was neither a single wrong word, a single negative word, nor a single excess word,” to which he immediately replied, “Thank you, Henry. Unfortunately, there also was not a single new word!”

His syntheses generally tend to make everything he reviews, in fact, “new.” His formulations provide a pure, sharp, and fresh impact. For example, many people, including me, attempted for years to characterize the difference between the forces of risk acting on whole populations and those acting on individuals, and we had devised various and vague terms for the concept. I once published an editorial in the New England Journal of Medicine that contrasted the Academic View of coronary heart disease (of the mechanisms and in the individual) with the Pragmatic View (of a mass disease of culture, in populations). This concept, so crucial to understanding the roles of medicine and of public health and to explaining much of needless public controversy, fell together only under Geoffrey’s thought and language, in his famous paper, “Sick individuals and sick populations” (Rose 1985).

Geoffrey has said that others in our field were earlier more population and intervention-minded than he about the causes and preventability of CHD. But to him goes the credit for crystallizing, formalizing, and effectively propagating these concepts critical to good practice and sound policy.

Some of us recall Geoffrey’s ideas at an early period of health promotion about the necessary limits of feasible worksite interventions in the population: that is, a lecture or two from a physician, some brochures from the company nurse, and a few modifications in the cafeteria. If such a program did not work, according to Geoffrey, that was simply too bad; prevention at the public health level would not be feasible. Geoffrey’s thinking during this period contrasted to our plans in the United States for a more intensive, massive, and costly multiple-risk factor intervention trial. After all was done, on both sides, I arrived, rightly or wrongly, at the following aphorism about U.S. And U.K. research pursuits in prevention:

British epidemiological studies and trials are characterized by much brain and little brawn. In contrast, North American trials have muscle-bound brawn and little brain. Undoubtedly, better research would be carried out on both sides of the Atlantic if the British were to employ a bit more brawn and the Americans a bit more brain.

I close with a final illustrative note from the days of our writing Rose and Blackburn. It has to do with the order of authorship of the WHO Monograph itself. In Geoffrey’s mind, our effort for WHO was primarily to produce a manual of method and procedure. He had no doubt, therefore, that the order should be Blackburn and Rose, since my contributions were largely methodological. Similarly, there was never any doubt in my mind, because of his outlining of the epidemiological principles, and his major personal contributions to methods, plus the strong stamp of his style and language on the monograph, that Rose must be the first-listed author.

We left Geneva still at loggerheads on the matter. By correspondence thereafter we quietly lobbied Zdenek Fejfar, each insisting on the priority of the other as senior author. In this unique case of “Alphonse and Gaston,” the overwhelming superiority of my argument won out. Typically, Geoffrey was dignified in defeat. He reluctantly but graciously accepted to be first author of Rose and Blackburn.

The issue of priority of authorship came up again with the second edition, in this letter, found here from Rose to Blackburn suggesting reordering the names along with adding the new co-authors. The letter is classic Rose humility. (Henry Blackburn)