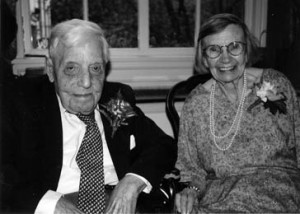 Margaret and Ancel Keys were just back from a field trip to Sardinia in 1954 when we first met in the family music room of Minneapolis friends, Reuben and Isabel Berman.

They were truly both a family and a professional team. Margaret contributed to the earliest scientific pursuits formulating the K-ration. She shopped to get the ingredients for the successive versions of that famous survival ration.

Her essential role in the grand adventures leading up to the Seven Countries Study is well documented in photographs and in her journal. She set up the laboratory and did the serum cholesterol determinations on their first population survey in the fogs of Slough, near Oxford in fall 1951.

Many have heard about how Ancel during their Oxford Sabattical followed up on the claim by Professor Gino Bergami that heart attacks were rare in the workers of Naples. Ancel, chafing under an intense lecture series in the damp cold of Oxford, decided that such a clue should be run down. Their trek to Naples in winter 1952 began the great study of lifestyle and heart attacks that became the Seven Countries Study.

Margaret set up the survey laboratory and did the chemistries in that first exploration to compare the eating patterns and cholesterol levels among different cultures. Much of what we understand about individual and cultural differences in risk of heart attack began with that simple comparison. The workers with Mediterranean eating styles had low cholesterol levels and no coronaries. The bankers ate like Minnesotans and had similar high cholesterol and rates of heart attacks.

Ancel and Margaret and colleagues went on to South Africa to make comparisons among the European colonials compared to the Bantu and the Cape Colored ethnic groups, finding further confirmation of Ancel’s early ideas about diet, lipids, and heart disease.

Margaret was also central to the 1956 expedition to Japan. It was designed to hold genetic factors constant by comparing Japanese across social classes in Japan, and then across cultures: mainland Japanese versus Japanese who had migrated to Honolulu or on to Los Angeles. This pioneering study confirmed the centrality of eating patterns in determining average blood cholesterol levels and eventual risk of heart attack on the scale of whole populations. That became the Keyses’ central contribution to knowledge and to preventive practice and policy. These Medical Marco Polos brought home ideas to test more stringently about the sociocultural causes and prevention of heart attack and stroke.

Margaret was equally essential to the Keyses’ activity after the Seven Countries Study became more routine than romantic. Their great joint contribution to good health and dining pleasure was their 1959 book, “Eat Well and Stay Well.”  Ancel wrote the scientific narrative swiftly, eloquently, and clearly. His writing flowed like Mozart’s composing, emerging whole, in a single piece, with great clarity and structure of the ideas.

But we know who best knew the ingredients and composed the recipes and tested them again and again until they were finally easy—and perfect. The Keys cookbooks were truly a major joint effort. They became best-sellers and now are collectors’ items.

Then came the fruitful joint activity of Margaret and Ancel in planning, building, and embroidering upon their Villa Minnelea. There is scarcely imaginable a more welcoming Shangri-La of good science and good living than their prominence above the Tyrranean Sea.

Dozens of conferences in their grand seminary of pioneers and original thought gave direction to researches around the world in a fellowship of common concern for health. It would be hard to identify in the annals of medicine a more unifying setting than Minnelea.

Ancel Keys wrote his magnum opus on coronary disease in the Seven Countries Study at age 75. In photographs, one sees Margaret citing the data, dictating the references, gathering the material for entry into the narrative and the graphics of that lasting monograph. Together they did everything but the printing. Then she would slip off into the kitchen and lay out the wonders that kept them nourished, healthy, and vital.

Few know the whole of Margaret’s strength and contribution to the years of Ancel’s decline: her constant awareness, her efforts to help his struggles with reading, computation, and writing, her handling the frustrations of unaccustomed impairments to the formidable productive force that was, for so long, Ancel Keys’s. He died a few weeks short of his 101st birthday!

Today, Margaret and Ancel’s character and values live on vividly in their family and colleagues and in those who cared so devotedly for them at the ends of their lives.