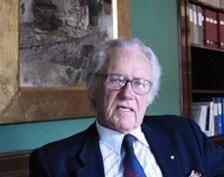 Lars Werkö, renowned cardiologist of Sweden, was born in 1918 in Karlskrona, a small city in southeast Sweden where he also attended school. He received an MD degree after studies at the Karolinska Institute in Stockholm and in 1946 went to Bellevue Hospital in New York City to work with André Cournand. There he learned the new technique of cardiac catheterization at a critical time in the modern evaluation of heart and lung function. In 1947 he returned to Sweden to prepare a doctoral thesis on pressures in different regions of the lung circulation during high pressure ventilation. His work on “pulmonary wedge pressure” advanced the method of estimating left atrial pressure that was critical to evaluation of patients with various heart diseases.

In 1957, Werkö was elected professor of medicine in Gothenburg as well as head of the Department of Medicine at the Sahlgrenska University hospital. His 20 years there marked the entry of modern medicine in Gothenburg, and the department became a popular training center. New diagnostic methods, new treatments, and new drugs were introduced during scientific activities at a high international standard.

Werkö was greatly esteemed as a lecturer and seemed naturally gifted as a departmental chief. During these years, some 30 doctors defended a PhD thesis and some 100 peer-reviewed papers were published. He actively took part in the care of patients and started special clinics for the care of patients with hypertension and following myocardial infarction. He supported epidemiological studies as well as clinical studies of mitral valvular disease and myocardial infarction.

After 20 years as a department head, he moved to the pharmaceutical industry at the Astra Company, where he stayed until formal retirement at age 65.

In retirement, Werkö remained active during 1987-1997 as chairman of the Swedish Council on Technology Assessment in Health Care, where he remained part-time until his death in 2009 at age 91. There he developed methods for assessment of medical interventions and produced a long series of influential reports.

Werkö held office in a series of national commissions as chairman of the Swedish Association of Physicians during the years 1962-1966, chairman of the Gothenburg Medical Association, 1967-1975, dean of the Medical Faculty of the University of Gothenburg, 1974-1976, as well as member of international bodies including Advisor to the World Health Organization. He had a major impact on Swedish medical care over a period of 50 years.

Werkö was always well-informed in the medical literature, and, in addition, had a large private library where medical literature was forbidden. He was well-read in both Swedish and English literature. His autobiography was published in 2000 in which he reviewed the course of Swedish medicine from 1930 to 2000. He was a major figure in Sweden and in medicine internationally, with a progeny of many Swedish medical leaders. (Kalevi Pyörälä MD)