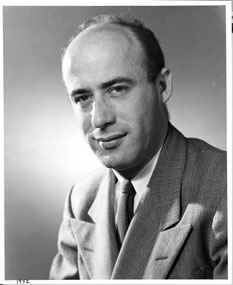 BERKELEY – John William Gofman, a University of California, Berkeley, professor who first discovered the role of LDL and HDL in heart disease and went on to document and publicize the health dangers of low-level radiation, died Aug. 15 of heart failure at his home in San Francisco. He was 88.

In the field of medicine, Gofman is renowned for his pioneering work to identify the fat molecules, called lipoproteins, that transport cholesterol in the blood and then, using human subjects, to demonstrate the relationship between blood levels of these lipoproteins and the risk of heart disease. Earlier this year, when the Journal of Clinical Lipidology reprinted Gofman’s seminal 1955 study laying out the role lipoproteins play in atherosclerosis, the journal’s editor in chief, W. Virgil Brown, called him the “father of clinical lipidology.”

To the public, however, Gofman is best known for his research since the 1960s on the biological effects of low doses of radiation. Spurred by increasing radioactive fallout around the globe from the testing of nuclear weapons, the late UC Berkeley chemist Glenn T. Seaborg, then chair of the Atomic Energy Commission (AEC), urged Gofman to start a biomedical division at the AEC’s Livermore Radiation Laboratory to study the effects of ionizing radiation on human health.

Working with another UC-trained scientist, the late Arthur R. Tamplin, Gofman became convinced by their research that low-level ionizing radiation increased the risk of cancer more than people assumed. He was tireless in pressing the federal government to drastically revise standards for radiation exposure, to limit nuclear tests and to cancel projects to use nuclear explosives for digging harbors and canals. In 1971, Gofman and Tamplin called for a five-year moratorium on the licensing of new nuclear power plants so the public health consequences could be studied. He also pressed doctors to reduce unnecessarily high doses of X-rays.

“Within the Atomic Energy Commission itself, there was almost an immediate response to gather the troops to refute Gofman and Tamplin, organizing AEC-funded scientists to write letters saying he was wrong,” said Charles Weiner, professor emeritus of the history of science at the Massachusetts Institute of Technology and a visiting research professor at New York University. “What they resented about Gofman was that the consequences of his research threatened their program, which was to develop nuclear explosives and to promote nuclear power. He resisted their efforts to suppress his research.”

Gofman’s findings ultimately were verified by other scientists, and gradually led to changes in radiation exposure standards. His stand, however, resulted in the loss of his research funding at Livermore Radiation Laboratory, so that he left the weapons lab in 1971 to resume his professorship at UC Berkeley. After retiring from the university in 1973, he continued to fight the established view that there is a threshold below which radiation is safe, and founded in 1971 the Committee for Nuclear Responsibility, a nonprofit educational and research organization, which he chaired until his death.

“Gofman was always willing to speak out; he had a commitment to the integrity of science and the responsibility to bring research results into the open to be discussed by scientists and the public,” said Weiner, who is writing a book about social activism among scientists. “He had insights early on about what he called ‘adversary science’ and the need to discuss in pubic opposing or alternative views on major issues, particularly those affecting public safety.”

When he was well into his 70s and 80s, Gofman continued to research the link between low-level radiation and health, and concluded that accumulated exposures to excessively high radiation doses from medical X-rays were responsible for a large proportion of deaths today from cancer and heart disease.

“He was not at all opposed to X-ray examinations as extremely beneficial diagnostic and therapeutic tools of medicine, but he was very concerned about excessive doses and excessive numbers of procedures in a profession among which many still cling to the concept that these levels of exposure are ‘safe,'” said long-time co-worker and friend Egan O’Connor of San Francisco. “He felt much gratification during his last years by increasing efforts in radiology to reduce unnecessarily high X-ray doses from CT scans and fluoroscopy.”

Gofman was born on Sept. 21, 1918, in Cleveland, Ohio, the son of Russian Jewish immigrants who had fled czarist persecutions. He earned his A.B. in chemistry from Oberlin College in 1939, and completed one year of medical school before deciding that he needed to learn more chemistry. It was a fateful decision, because he entered graduate school at UC Berkeley in 1940 at a time when the university had become the center of high energy physics research. In 1939, Ernest O. Lawrence had received a physics Nobel for the invention of the cyclotron, or atom smasher, and using this instrument, Gofman’s thesis advisor, future Nobel Laureate and chemist Seaborg, was well on the way to his record-breaking discovery of 10 new elements of the periodic table.

Under Seaborg, Gofman earned his Ph.D. in 1943 in nuclear and physical chemistry for the co-discovery of isotopes of protactinium and of uranium-232 and uranium-233, and for proving that uranium-233 is fissionable with slow and fast neutrons. Because of the sensitive nature of this research, Gofman’s work became engulfed in the secrecy of the Manhattan Project, directed by UC Berkeley physics professor J. Robert Oppenheimer. Oppenheimer recognized Gofman’s chemical knowledge of plutonium and asked him to isolate enough of it for urgent experiments at the project’s laboratory in Los Alamos, New Mexico. After producing twice the plutonium needed, Gofman decided to resume medical school in the Naval Medical Officers Training Program and enrolled in what is now UC San Francisco in 1943 with the intention of serving in the Pacific. He graduated with an M.D. in 1946 after the war had ended.

In 1947, after a one-year internship at UCSF, he joined the Division of Medical Physics in the UC Berkeley Department of Physics. He formed the lipoprotein laboratory in the Donner Laboratory, now part of Lawrence Berkeley National Laboratory, where he focused on a difficult but important problem – the relationship between blood lipids like cholesterol and heart disease. He garnered one of the first ultracentrifuges in the United States, a device that spins liquid samples to high speeds in order to separate them by density, and started trying to separate the various fat and lipid particles from blood plasma.

“He had this notion that using this new-fangled device called the ultracentrifuge to study plasma would help to decipher coronary heart disease, when other researchers concluded this was not possible,” said Ronald Krauss, director of atherosclerosis research at Children’s Hospital Oakland Research Institute and adjunct professor of nutritional sciences and toxicology at UC Berkeley.

Gofman was right, and with a team that included long-term colleagues Frank T. Lindgren and Alex V. Nichols, both of whom received their Ph.D.s under Gofman, discovered and named the various lipoprotein classes, such as low-density lipoproteins (LDL) – today referred to as “bad” cholesterol – and high-density lipoproteins (HDL), the “good” cholesterol. Gofman and Nichols, now an emeritus professor of molecular and cell biology at UC Berkeley, were the first to do careful dietary studies that showed that people with different lipoprotein profiles responded differently to diets high in fat and cholesterol, and their collaborations with cardiologists demonstrated that certain lipoprotein classes correlated with heart disease.

They summarized this research in a seminal 1955 paper that “basically laid out the whole map for the field of lipids and heart disease for decades to come, which was absolutely remarkable,” Krauss said. “That’s where John Gofman showed the genius of his capabilities as a physician and a physicist. The paper was almost a bible for people in the field.”

Nevertheless, many found it hard to accept the complicated story of lipoproteins in the blood and their relationship to heart disease, Krauss said, and Gofman’s prescient findings had to be rediscovered 20 years later.

Krauss, who took over Gofman’s lipoprotein laboratory in Donner Laboratory from Lindgren and Nichols, Gofman’s successors, credits Gofman with laying the foundation for his own work today, which involves analyzing the relationships among people’s genetically defined lipoprotein profiles, diet and heart disease. As a tribute to Gofman’s pioneering work, Krauss last year rescued the 50-year-old ultracentrifuge from the basement of Donner Lab for future display at LBNL.

Gofman left this research behind in 1963 to found the medical division at what is now Lawrence Livermore National Laboratory (LLNL), the nation’s builder of nuclear weapons, to investigate the biological effects of radiation. In 1969, he and colleague Tamplin concluded that the risk of cancer from radiation exposure was far greater than estimates the government was using to set limits on public exposure. They urged that allowable public exposures be reduced and that testing be halted.

Such efforts were resisted by the government and private industry, but Gofman continued to protest, calling a plan for peaceful use of nuclear bombs – a program dubbed Project Plowshare – “biological insanity.” In response, one of Plowshare’s advocates, physicist Edward Teller, termed Gofman “the enemy within” the Livermore lab.

After serving from 1963 to 1969 as the first associate director at LLNL of the biology and medicine program, Gofman left the lab in 1971 to return to UC Berkeley.

Among his many research publications were numerous books, including, with Tamplin, “Poisoned Power: The Case against Nuclear Power Plants” (1971); “Radiation and Human Health” (1981); “X-rays: Health Effects of Common Exams,” with Egan O’Connor (1985); and “Radiation-Induced Cancer from Low-Dose Exposure: An Independent Analysis” (1990).

Gofman received numerous honors, including the 1992 Right Livelihood Award, the 1972 Stouffer Prize for research combating arteriosclerosis, the 1954 Modern Medicine Award, and the Lyman Duff Lectureship Award from the American Heart Association. In 1974, he was named by the American College of Cardiology as one of the 25 leading researchers in cardiology of the past quarter century.

Gofman is survived by his son, John David Gofman, a physician in Bellevue, Wash. His wife, physician Helen Fahl Gofman, died in 2004.

Listen to audio clips from interviews with John Gofman: