The London School of Hygiene and Tropical Medicine in CVD Prevention

The London School of Hygiene and Tropical Medicine (LSHTM), best known as a post-graduate university with a mission of training doctors to treat tropical diseases, also stands out as one of the founding institutions of chronic disease and CVD epidemiology. The origin of the London School goes back to the historic hospital ships Grampus and the several later versions of Dreadnought, which were offshore facilities of the Seamen’s Hospital Society. But it was the International Health Board of the Rockefeller Foundation, engaged with the early school’s hematologists in a worldwide battle against hookworm disease, that offered in 1922 to build a new school of public health in London. Under the direction of Andrew Balfour, the 52,000-pound-sterling Rockefeller gift funded construction of the building at Keppel and Gower Street, completed in 1929 and still in use today (Gibson 1995).[1] 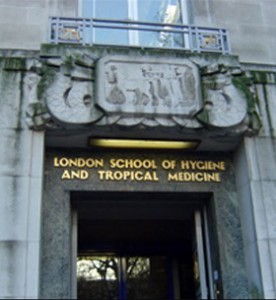 The London School of Hygiene and Tropical Medicine

Medical statistician, Major Greenwood, was the first LSHTM professor and chair of epidemiology and statistics and served from 1928 to 1945. Fighting for the use of statistical methods in medicine, he was central to the school’s evolution, and cemented his legacy by establishing Bradford Hill to succeed him. Much of the subsequent tone and leadership of the LSHTM derived from Hill’s scholarship in the design and analysis of surveys, cohort studies, and clinical trials and from his distinguished pedagogy on these topics. Hill’s celebrated “guidelines” for arriving at causal inference from statistical associations provided a rock on which epidemiological and public health structures are built.

From the late 1940s, the London School’s MRC research units established collaborations in CVD epidemiological pursuits, developing independent researches that had wide implications in the U.K. and abroad. The School worked closely, for example, with faculty of the University of Minnesota Laboratory of Physiological Hygiene on CVD survey methods, survey questionnaires, and the Minnesota Code for classification of electrocardiograms. Joint efforts of the LSHTM and WHO encouraged and gave international credence to the development and use of new, objective, and standard methods for CVD surveys and trials.

Walter Holland, a founding faculty member of the LSHTM curriculum for non-communicable diseases, left the School in the 1960s to take up his own program in epidemiology at St. Thomas’s Hospital. There he and his department were early leaders in the epidemiology of respiratory diseases and of hypertension and in methods of blood pressure measurement (Holland and Humerfelt 1964).

In its direction of the WHO Multiple Risk Factor Trial in Industry initiated in 1971, the LSTHM led in the concepts, design, and operation of an early multiple-risk-factor prevention strategy for CHD. Geoffrey Rose, as coordinator of a WHO expert report, played a central role in the synthesis and evolution of a population strategy of CVD prevention that addressed “sick populations” and complemented the medical orientation toward “sick individuals” (World Health Organization 1982).

[1]A frieze on the exterior of the building that has housed the LSHTM since 1929 recognizes twenty-three pioneers of public health disciplines. “Mystery surrounds the reasoning” behind the selection of the honorees, according to a note on the School’s Internet website: The only female name on the short list was that of Florence Nightingale, who was excluded because her surname of eleven letters was too long for inclusion. However room was found for the name of Max von Pettenkofer (count the letters) who is mainly known for having denied that cholera was a water-borne disease (Gibson 1995).

Gibson, M. 1995. Behind the frieze. London School of Hygiene and Tropical Medicine.
Http://www.lshtm.ac.uk/library/archives/frieze.html.