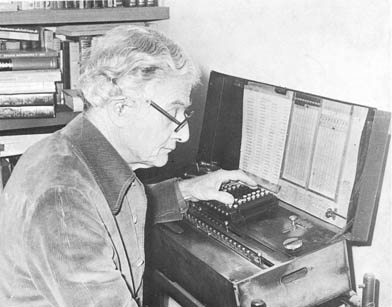 Frank Yates, a colleague of R.A. Fisher’s at the Rothampsted Experimental Station, in his office in 1974, using the Millionaire calculating machine developed by and built for R.A. Fisher (ibid., 273-274).

R.A. Fisher, father of modern biometry, became a close friend and colleague of William Gosset, statistician at Dublin’s Guinness brewery, largely through correspondence. They laboriously and separately calculated the distributions of t; Gosset, for example, calculated all values for t=1 from N=2 to N=30, out to 7 decimal places and found that his were almost identical to Fisher’s calculations (Box 1978, 116). Gosset’s t-test became famous, of course, under his pseudonym “Student,” used to evade the brewery’s proprietary policy.

“One image is [of] Fisher working his “Millionaire” (his self-designed mechanical calculator) at [his laboratory] Rothamsted, a large machine on which one turned a crank to set the number and inserted a plunger to start its noisy operation at each step; . . . One imagines Gosset putting his hand-operated “Baby Triumphator” into his work sack and carrying it home to work on the tables in the evenings, calculating t by his formula, checking with Fisher’s results, and recalculating doubtful values” (ibid.,117).

“[Fisher] liked his Millionaire calculating machine and was disdainful of the up-to-date desk calculators which were in plentiful supply by the mid-1930s. The Millionaire stood on its own stand. It was clumsy to move and operate and it made a noise like an old threshing machine. Fisher defended it because it did multiply instead of doing multiplication by repeated addition like the other calculators. He could make it perform complicated calculations both quickly and accurately. Others also worked much with the machine and appreciated its virtues, like Frank Yates at Rothampsted, who…kindly permitted himself to be photographed at the Millionaire still in his office at Rothampsted in 1974” (ibid.,117).

[ed. In Fisher’s laboratory was a cat the students called “Chi- squared,” whereas Fisher had named the cat Hathor, for the Egyptian Goddess of Love. The name Chi-squared reflected the awe and affection with which the students regarded Fisher (ibid., 273)]

Fisher devoted much of his life to solutions of genetic and evolutionary questions using statistical methods; for example, he found the distribution of the correlation co-efficient using multi-dimensional geometry. Using variance components, he demonstrated that human inheritance was entirely consistent with Mendelian principles. But he is mostly known for provision of tabular distributions of “statistics for common use,” which were valuable with the small experimental samples used at the time, where it was essential to know the theoretical distribution to assess the actual results.

He formulated the genetical theory of natural selection in 1930 and became Chair of Eugenics at University College London, working primarily with human blood groups and doing most of his experimental work with mice. He was one of the first to develop the idea about designing experiments to gain more precise information for a given amount of experimental effort, thus developing, in fact, the methodology of modern biometry.

Please click here for a short but proper biography of R.A.Fisher, detailing his career and complex relationship with the famed mathematician Karl Pearson.

[ed. I was amazed to see a photograph of Fisher at Lake Junaluska Assembly in North Carolina (a Methodist campground where I used to work summers as a boy), in 1946 during a period when he was on sabbatical at a small North Carolina college. (Henry Blackburn)]