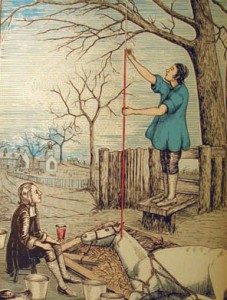 The Reverend Stephen Hales, a brilliant experimental scientist, left Cambridge in 1709 and began researches on blood pressure at his Parsonage in the Parish of Teddington, Middlesex. A classic experiment with his mare, due to be put down for an abscess, was motivated by this principle: “Since animal fluids move by hydraulic and hydrostatic laws, the likeliest ways therefore to succeed in our inquiries into the nature of their motions, is by adapting our experiments to those laws” (Clark-Kennedy 1929;24). Hence:

In December (1710?) I caused a mare to be tied down alive on her back; she was 14 hands high, and about 14 years of age, had a fistula on her withers, was neither very lean nor very lusty: having laid open the left crural artery about 3 inches from her belly, I inserted into it a brass pipe whose bore was 1/6 of an inch in diameter; and to that, by means of another brass pipe which was fitly adapted to it, I fixed a glass tube, of neary the same diameter, which was 9 feet in length; then untying the ligature on the artery, the blood rose in the tube 8 feet 3 inches perpendicular above the level of the left ventricle of the heart: but it did not attain to its full height at once; . . when it was at its full height, it would rise and fall at and after each pulse 2,3, or 4 inches. . .” (Hales,1738; 1).

This was followed by some years of studies in different species producing comparative data on cardiac output, blood pressure, systolic velocity of the blood, and “time taken for the heart to expel a weight of blood equal to that of the animal’s body in minutes.” This was accompanied by complex studies of the two main contributors to arterial pressure, cardiac output and peripheral resistance. The first he studied with wax casts of the left ventricular cavity injected with the usual intraventricular pressure. The second he approximated by measuring changes in blood flow at many stages down the arterial system: “.. we see how greatly the velocity of the water is retarded in passing thro’ the several branchings of the arteries, notwithstanding the sum of the areas of their transverse section is considerably greater than that of the aorta” (Clark-Kennedy 1929;35).

Thus, Hales developed fundamental facts of comparative physiology, on heart rate and output and progressive diminution of flow velocity as the arteries got smaller, with blood pressure proportionate to animal size: “As in bigger animals, the blood has a longer course to go, and must therefore meet with a greater resistance; . . .[so[ that the force of it in the arteries is in the main greatest in the largest animals” (ibid.31) (Henry Blackburn)