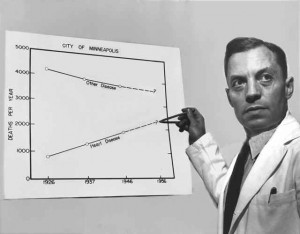 With permission of the Minneapolis Star-Tribune, Sunday, November 30, 1947

This 1947 photograph of Ancel Keys may represent the first schematic of the Epidemiologic Transition, at least with reference to its flagship, Coronary Heart Disease. In the photograph, Keys appears to be presenting the emerging heart attack epidemic in his typically forthright manner, having plotted crude local data on numbers, not even rates, of cardiac deaths in Minneapolis from the mid-1920s to the mid-40s. Then he apparently forces a line through the three data points and extrapolates the trends for cardiac and non-cardiac deaths a full decade into the future.

This simple, bold projection, used to illustrate the heart attack problem for his CVD Study recruitment meetings in 1947, was forerunner to Keys’s proposals for deeper Minnesota researches into the causes of CVD in both laboratory and population settings.

This 1947 action photograph tends to establish a certain priority of Minnesota thinking about the mounting coronary epidemic, thereby ushering in its role in the origins of formal CVD epidemiology. The first examinations of the Minnesota Business and Professional Men Study, a small cohort of 500 men in the fall of 1947, were followed soon by an extended series of informal international comparisons by the peripatetic Keys and Paul White, and then, a decade later, by Keys’s international team’s long-term prospective study of diet, risk, and heart attack rates in 12,000 men among 14 cohorts of the Seven Countries Study. (Henry Blackburn)