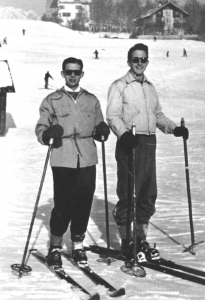 Albert Sullivan was one of my longest-term and best friends, dating back to medical school days in New Orleans and internship in Paris. His and Tess’s presence later in Minnesota was a major factor in our coming here with our new family for my residency training.

I gave this eulogy in celebration of Al’s life for the funeral service at St. Mark’s Episcopal Cathedral in Minneapolis. It provided an antidote, I trust, to a formal service marred by the Dean of St. Marks’s pompous “fire and brimstone” evangelism delivered in the name of the great “sinner,” Albert Sullivan!

Al Sullivan — a great sinner? In need of that self-righteous dean’s redemption? Please!

In the film, The Razor’s Edge, based on the book by Somerset Maugham, one character says of the hero, Larry: “My dear, Larry has found what all of us want and very few of us ever get. I don’t think anyone can fail to be better, or nobler, or kinder, for knowing him. You see, my dear, goodness, after all, is the greatest force in the world. And he’s got it.”

Goodness is the force that brings us together here today and brought the hundreds yesterday to the long lines at the visitation. It is not for the form or the show that we are here; it is simply about Albert Sullivan’s goodness that has touched each of us in different ways. This goodness came from a strict sense of right that marked Al’s childhood and culminated in his quiet and gracious maturity. From early in his life, he wanted to help people, and he remained able to do so for the entirety of his life.

Someone may have counted the thousands of students admitted to Minnesota’s Medical School under Al’s guidance. But no one could ever count what he really did to encourage them, each and all, the brilliant and the less so, through the tribulations as well as the high moments of their medical studies. He always managed to let students in trouble know that they could talk with him. “No problem” if they didn’t; they could take it or leave it. There are countless richer medical careers and, I suspect, more intact medical personalities around today because of Albert Sullivan.

His goodness was closely tied to his fairness and keen sense of right. To recount just one of many examples, I recall the way he worked through an urgent medical and ethical issue back in the days of our Paris internship. It showed remarkable resoluteness, not to mention diplomacy.

A young American woman biking around France had come in, toxic and miserable, with a severe infection out of which a penicillin-sensitive organism was cultured. But the ancient consultant in charge in that hospital in late 1949 simply “didn’t believe in penicillin.” As the patient became ever more ill, Al called us interns together and set up a schedule for the clandestine administration of penicillin in the wee hours of the night.

After the infection had been controlled, he quietly informed the distinguished, if misguided, consultant of what we had done. In an intolerable situation, unable to question medical orders, he had led us to a solution consonant with our training and our conscience. All the while, he tactfully retained the respect of those grand patrons of France for whom we slaved. Throughout our year in that authoritative medical environment, he demonstrated the liberté, égalité, and fraternité that we enjoy in American medicine. And, on the side, he was able to do good turns for many sick Americans in Paris.

The University of Minnesota Medical School, I assure you, already misses Al’s goodness toward students, his ability to bring in the best and bring out their best during their studies. His patients, too, already miss the devotion and genuine concern characteristic of his long and distinguished surgical practice. His basic fairness carried him through the tough times that any dean must have, such as with students who are not making it, or with those who bitterly attack the system rather than examining their own deficiencies. We admired but never could emulate his equanimity in the face of these larger issues, where he and the school had to take a strong and principled stand.

On smaller issues of fairness, “Sully’s” pervasive calm and strength occasionally could give way to righteous indignation. For example, over many years his office sponsored a weekly lecture and free lunch in the Mayo Auditorium at noon. There were always a few faculty who would eat the lunch quickly and then try to sneak out early before the talk. They might find themselves confronted in the lobby by Sully, who let them know that their manners were unacceptable: “It’s simply not proper to eat and run. Besides, there’s no such thing as a free lunch,” he would say to these slackers.

On the big issues, the life-or-death things, Al’s goodness was always at work for us all. We each had personal experiences of his goodness. I am particularly privileged to share mine with you.

Al did the tough job of calling me long-distance one morning 10 years ago, while I was examining farmers on a Greek island. I heard him say the quiet phrase, “Henry, your son John has just been admitted to the hospital with a space-occupying . . .” Suddenly, the phone went dead. We were cut off. But I had heard enough to run for the first plane off the island. From that moment on, for a whole year, Al was always present to comfort John and to guide us in his care. Al and Tess together were always there to support our family in our anxiety and grief. They were able to deal rationally, kindly, directly, and unabashedly with us and with our dying boy. That rare and special quality can put a dying person and his distraught family together and make them natural and whole again.

Al gardened; he practiced regularly on his piano. His family surprised him, as he got weaker this year, by finishing off a beautiful but complex chest of-drawers kit that he had started years before. He was a whiz on his MacIntosh computer. And after he became the first-ever, double-balloon aortic angioplasty patient 12 years ago, he turned into a world-record long-distance biker — 20,000 miles — nearly around the Equator, on a stationary bike! Meanwhile, Tess became a world-record chef of low saturated fat, Mediterranean cuisine. They showed us all how to do it right, that is, lowering risk factors the healthy yet gourmet way.

In mentioning his adventuresomeness, I nearly forgot about all those languages Al spoke. It was infuriating. In Paris, some of us were so concerned with speaking precisely and with a perfect accent that it took us months to speak any French at all. From day one, however, Al chatted away, getting the ball over the net — to heck with unstylish strokes. Somehow, I thought that language was a mark of education and style. Somehow, Al thought that language was something to be used to communicate with people.

If Al was famous in the Twin Cities for his humorous quips, he was famous in Europe for his collection of argot. To the envy of us all he would high-five the janitor in the Paris hospital: “Ça boume! Ça gaze!” I learned only recently the source of most of Al’s marvelous stories here in Minnesota, which he would spin to brighten each day in the surgical theater. They came from almost daily morning phone chats with his brother Allen in Nashville, whose stories came, in turn, directly from Allen’s friends, the likes of Chet Atkins, along country-music row.

Al’s was a good life. If there are quantitative differences in goodness, if some goodness is better than other goodness, then I suggest that the higher goodness is one that is quiet and unpretentious, requires no response or reward, breaches no exceptions, and flows easily.

Albert Sullivan had this higher kind of goodness. When one tried to acknowledge the goodness he gave so naturally, it would make him self-conscious. He would parry efforts to be serious, or to take him seriously, with a silent smile, or by offering some joke or non sequitur. If really pushed by someone’s gratitude about a good turn, he would say, “C’est mon plaisir, mon ami.”

Disease and suffering and indignities come to most of us with age. Today, I confess a huge feeling of loss not to have Albert around to hold my hand and tell me stories as I face those trying years. But, if there is one thing we can all take from this last year we have had with Al, it is the courage to face the inevitable, the calm to do it with dignity, and the goodness to do it with gratitude to those who carry us through.

One day recently, alone with him, I indicated to him, and later to his family, that they can now put the tragic parts of this experience firmly behind them, because they have carried each other so beautifully and have given of themselves so fully. There are simply no regrets to be regretted, except for the inevitable loss itself, the loss of Albert.

Al’s wife, Tess, his sons, Bill and Tim, daughters-in-law, grandchildren, sisters-in law, brother, aunt, and many other caring relatives, friends, colleagues, physicians, nurses, aides, and students — all carried him marvelously, and one another, through this unthinkable period.

But it was also a rich year for Al, as it was a rich year for us to have shared. We sensed his acceptance of leaving, just as we saw his delighted reveling in each old memory or new anecdote brought to him. His uncomplaining courage and warmth brought us the strength we needed for ourselves — and drew from us the words and the care we wanted to give him. Few people will ever experience more obvious caring and more acknowledged affection than did Al during this period.

I am privileged to share these thoughts with you — about a good man, our friend Albert Sullivan.