Home > Essays > “It Isn’t Always Fun.” – Our Beef with the Ag Campus
Share

“It Isn’t Always Fun.” – Our Beef with the Ag Campus

Marion Nestle’s new book, “Food Politics,” is a courageous and well-documented analysis of the food industry’s powerful influence on food production, eating patterns, and political economy in the U.S. The book sheds light on a dark and corrupting element that pervades the culture, academia, government agencies, and the public health: the industry push to “Eat More!” Minnesota is touched in many ways by this influence, one of which is the enmity held among some of its Ag Campus faculty who misinterpret School of Public Health findings and recommendations as “anti-meat and anti-dairy,” when, in fact, they are only anti-very-fatty-meats-and-dairy. We tried to do something about those attitudes. 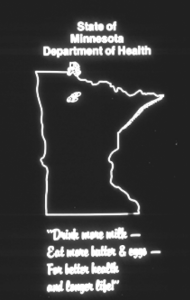 Minnesota Department of Health Logo from the

Depression until the early 1960s:

In the mid-1970s, I began to get involved with larger issues of health and  nutrition policy, dating from an invitation to write a think-piece entitled, “Diet and Hyperlipidemia. A Public Health View,” in a book edited by Robert Levy, Director of the National Heart and Lung Institute. At the time, Senator George McGovern chaired a Senate subcommittee that was compiling and converting evidence about nutrition and health [from Minnesota studies and elsewhere] into major change in research and public policy. During these excursions into prevention policy, I met Bill Hueg, dean of the Institute of Agriculture of our university. Together, we developed a seminar to encourage dialogue among our faculties. The idea was for each side, medical and agricultural, to present for discussion its work and views and provide an example of experts resolving nutritional issues of national concern and controversy. Or so we thought.

The seminar lasted barely a couple of meetings before it boiled over. Instead of the anticipated useful discourse, it was adversarial from the outset. The Ag faculty became personal in their attacks; we tended toward the defensive. Eventually, someone sent me anonymously a copy of an internal memo directed to the animal science staff from a professor of genetics on the farm campus who had been a voluble critic of our efforts. He had made what he called a statistical analysis of the relationship of dietary cholesterol to cardiovascular disease, with no experience of epidemiology or of clinical science or of lipid metabolism or of human nutrition. He seemed focused narrowly on dietary cholesterol, not overall diet effects on blood lipids and disease, etc.

Re: “Recent developments regarding cholesterol and dietary recommendations.”

The attached letter from Henry Blackburn is indicative of the kind of pseudo-scientists that science nutritionists and animal scientists must deal with relative to cholesterol in the human diet. As animal scientists, we have a responsibility to see that objective scientific information is made available to consideration by the committee [presumably, referring to the Senate Select Committee on Nutrition].

However, according to the text, and information from the National Meat Board, the committee apparently doesn’t want to hear both sides. With individuals such as George McGovern and Henry Blackburn posing as authorities on nutrition, claiming to be wearing ‘white hats,’ and using information in an emotional way, the animal industry faces an unjust problem.

What, in your opinion, should the Department of Animal Science do about such arrogant misuse of research facts?”

In response, I wrote this discouraged note to Bill Hueg:

I am really terribly sorry to embarrass you with the enclosed memorandum of Professor T. He was, I believe, the only senior member of your staff who failed to attend any of our presentations before the Joint Nutrition and Public Health seminar last spring.

I suspect that I am as guilty as most academicians in having opinions in areas not wholly within my competence but I don’t believe I pose as anything I am not. At any rate, I wonder whether T’s evaluation of our scientific competence over here is based on his reading of any of our scientific work. The fact that, as a worker in cardiology and in public health, I cited the recommendations of 16 independent expert national and international committees indicates that I do not pose as or consider myself an authority on nutrition. (Not, however, an ignoramus!)

I guess that our joint seminar and the rich discussions we anticipated, which haven’t materialized from it, can be reckoned a considerable failure. This suggests to me that if we can’t talk on our own campus there will be even greater difficulties at the national level. Change will then come about by means outside the reasoned deliberations by authorities of good will, from multiple disciplines, which you and I intended would take place.

Aside from any personal valuations of professional competence, I suspect that you will find with me that the enclosed memorandum is unprofessional and unseemly. It is not one that you would condone circulating in your institute, of that I am sure.

Later, during a meeting that both the infamous Professor T. and I attended, I was called out urgently to receive the news by telephone that my son had just lost two fingers in a millwork shop accident in New Orleans. I came back, shaken, to the committee room with the awful story, asking to be excused from further deliberations that day. Everyone spoke with great sympathy — except Professor T. This was particularly shocking given that he had lost his left hand in an accident many years before.

Later that year, I had a pleasant visit with C. Eugene Allen, professor of meat science on the St. Paul campus, who subsequently became dean of the Ag Institute and vice president of the University. Like his predecessor, Bill Hueg, he was a fair-minded person with broad views on nutritional science. Allen also had been principally responsible for the dramatic and effective national development in breeding of lean pigs. The object of our meeting was to increase my knowledge of meat production and composition and of the agro-economic forces brought to bear to produce fatter or leaner meats. A parallel goal was to improve discourse with the St. Paul campus, thinking that personal contacts and discussions might be more rewarding than the joint seminars had been. As a result of our meeting, I wrote a long memo to my academic and nutrition staff concerning what I learned from him, most illuminating things about beef production and the determination of fatness and tenderness of beef.

This meeting with Allen more or less terminated several years of increased communication with the Ag campus at Minnesota. In the end,  Allen attributed the fury of his faculty and the agricultural establishment to what they considered our anti-meat stance. I protested this in a memo to him: “If you were to give people lean red meats, as you have with pork and fowl, the medical and public health community would be delighted and quite supportive of such red meat consumption.”

During the 25 years since this exchange, the national diet has moved steadily in the direction of decreased consumption of fatty meats and saturated fatty acids, now down to 11 percent or less of daily calories from 20 percent or greater. Emphasis on lean meat production is pretty much a fixture throughout the meat industry today. This does not mean that the job is done.

In the late 1990s concern was renewed over backsliding in what has proven a more healthy eating pattern in this country. And the continued unphysiologic feed-lot finishing of beef with corn and other grains has become not only the prime source of fatty meat but also of dangerous chemical, hormonal, and bacterial meat contamination.

In the end, the public health community and the agricultural community at the University of Minnesota met together in troubled times. Mostly, they didn’t understand or like or trust each other. Eventually they agreed to disagree. Overt inter-campus communication ceased, while quietly arranged collaborative researches went on apace.

Meanwhile, the USDA-HEW Dietary Guidelines for Americans, along with the economics of food production and marketing, took over. These circumstances quite overwhelmed the hot issues we debated during the turbulent 1970s. The progressive elements in agriculture and academia responded positively, for a time, to sound, congruent scientific evidence and to demonstrated public health needs in respect to composition of the U.S. diet. Wide-ranging health promotion and marketplace factors did the rest.

We deal perennially, however, with changes in and challenges to the U.S. Dietary Guidelines and with industry backlash and public backsliding in eating patterns. Eternally, it seems, we in public health work, and the people suffer, under an egregious agri-business policy of “Eat More!”