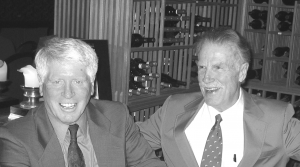 I’ve known Jack Farquhar for 50 years! It is a great pleasure to be at Stanford today to celebrate his contributions at a time of happy transition for Jack and Christine.

Major influences on Jack’s career include his early exposure to John Gofman in medical school. Jack opined to me recently that Gofman “had it all down already in 1950” (i.e. the blood lipoprotein-atherosclerosis issue). Jack’s encounter as a house officer with a patient named Roger, a young heart attack victim, moved him profoundly about the need for individual prevention. Then, as a medical fellow in Minnesota, Jack had “an audience with the Pope,” Ancel Keys, who impressed him with the implications of international differences in heart attack rates and the potential for wider prevention.

In Minnesota, he had other visits with the Cardinals around the Pope, such as Joe Anderson, who headed Keys’s lipid laboratory and counseled Jack in his first research. That was a feeding experiment of the plant sterol, sitosterol, carried out at the Minneapolis VA Hospital, where Jack and I were residents together in Internal Medicine in 1953-54. There, Jack was first introduced to research, statistics, and trials to reduce risk.

Soon after, Jack met Pete Ahrens and accepted a fellowship with him at Rockefeller University where he “became a biochemist” immersed in studies of diet and blood lipid responses and where he met many central players in the field.

Returning to California for a cardiology fellowship at Stanford he joined with Jerry Reaven to explore theories about insulin intolerance. Jerry says he already sensed Jack becoming restive and attributed it to Jack wanting to “help people.” According to Jack, however, “the environment and population stuff was going on — and I wanted something more.”[Wouldn’t that be a good epitaph for Jack: “I wanted something more”?]

By then Jack was well-known in the international “Lipid Club.” In discussing his expanding ideas with Don Fredericksen at NIH, he obtained Don’s help for a Sabbatical at the London School of Hygiene and Tropical Medicine, along with the good advice to hook up with Donald Reid and Geoffrey Rose. En route to London in September, 1968, and still on honeymoon with Christine, he attended the Makarska Conference on Clinical Trials in Yugoslavia, where U.S. and international plans were being laid for preventive strategies and mass trials under NIH and WHO auspices. It was a seminal moment in CVD prevention and Jack and I were there together, participating.

[I was also there as Project Officer for the Seven Countries 10th anniversary survey in Dalmatia and to help organize the first 10-day seminar in CVD epidemiology. I recall Jack’s conversation then as grand and visionary.]

On to London, Jack’s vision as well as his epidemiological skills were enhanced by fellow Scotsman, Donald Reid. For the first time in years, according to Jack, he found his time and mind liberated. He returned to the States renewed and full of ideas for larger population strategies of prevention. He was already convinced that multi-factor preventive trials among those at high risk, the priority proposed at Makarska, meant “only more clinics and doctors’ offices,” not the wider health promotion required for reducing epidemic CVD.

Jack then entered the special atmosphere of Stanford in the early 1970s, including the social learning ideas of Al Bandura and Henry Breitrose, the communications ferment around the Maccobys, and the vision and support of a new Chief of Medicine. All this helped formation of the Stanford CRDP and the landmark community studies to follow.

We will hear more today about Jack’s subsequent activities in health promotion and wellness as well as his international “Declarations” and activism on the larger health, economic, and political scene.

We leave Jack’s early career with the clear recognition of his pioneer involvement and contributions. He had arrived among the earliest on the CVD prevention scene in the 1950s, in the clinic and in the laboratory. And he came very early to the population issue, in the 1960s, never thereafter diverting from its primacy.  While others toiled in the straw pits of the 1970s preventive trials, his eyes were on the vision beyond. As he said to me about this, “I was trying in my mind to test, not that lowering risk factors was good for you, but how you lower risk factors.”

Beyond Pioneer, we also consider Jack the Imprinter. He has engraved each node of CVD prevention, including:

• the patient and high-risk candidate, for example,
in a sensible, informative, readable recent guide: Diagnosis: Heart Disease,
• the physician and student at the heart of the system, as in his program on “Physician Heal Thyself,”
• the entire high-risk American population, as exemplified in the joyful invitation to a better lifestyle in, The American Way of Life Need Not be Hazardous to Your Health,

• the wide socio-cultural forces that promote ill health, as intervened upon in the Stanford Heart Disease Prevention Program and the Stanford Center for Research in Disease Prevention,
• and the arenas of international health, economics, and politics, in clarion calls to “stem the global tide of cardiovascular diseases,” with declarations emanating from Victoria, Catalonia, Singapore, and Osaka.

Nowadays, Jack speaks of “the need to train people in the political aspects of health and advocacy and social marketing.” He remains both pioneer and imprinter.

Now I want to speak briefly of the specific skills and characteristics I think provide the base of Jack Farquhar’s unparalleled career in prevention science. They include:

• the ability to conceptualize main questions and issues of cause and prevention;
• forward thinking from the patient and physician to the population and culture where they and illness originate;
• the quickness to move from evidence to implementation at each level;
• the readiness to take leaps of logic, then faith in the logic;
• the clarity and courage to avoid the “academic prerogative” of preventive trials in the 70s.

• the judgment and chutzpah to go directly to dissemination research in communities;
• the good sense to maintain roots in basic mechanisms and methods;
• the smart practice of reporting Stanford findings widely, to both clinical and public health audiences;
• the ability to see the grand picture and to target the whole culture;
• the unique vision of the “City” Declarations and the persistent activism over larger societal issues;
• the capability to acquire new skills and to make serial personal renewals;
• the motivation to act and the drive to accomplish.

Finally, I have known a few great people in my time. I would like for us look at their identifying features:

• A personality to persuade and carry the banner
• Determination to complete the task and move on
• Anger sufficient to seek justice
• Compassion to comfort the afflicted
• Courage to afflict the comfortable
• Optimism to parry the “nay-sayers”
• Brilliance to carry the debate, and
• Willingness to sacrifice for principle.

Of course, one might list a few other attributes found almost invariably among great leaders and which we would probably gloss over for the sake of comity this sunny afternoon, things that sound like, “tenacious; bull-headed.”

When my Evangelical forebears spoke of a great person or a useful career, they used to say that it was due to: “Providence coming unto a Ground Prepared.” Now we know, or think we know, that it is Chance and Will acting upon Genes and Evolution.

In Jack’s case it is the story of “Roger;” and it is the other chance phenomena that happened in California, Minnesota, Rockefeller, Makarska, London, and Stanford; and then, of course, it is the strong genes and determined will of a Scotsman.

These are just a few thoughts about our friend and remarkable international citizen, Jack Farquhar.