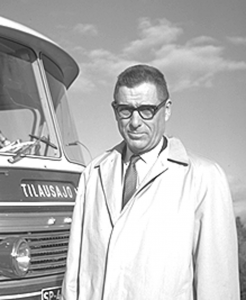 This is a moment to remember Henry Taylor and to recognize his contribution to the work and spirit of this Division. And — since it is Thanksgiving time — to acknowledge what he has meant, and still means, to us as individuals as well as to our institution.

Henry Taylor was born February 2, 1912, in St. Paul, Minnesota, and educated at Harvard College, where he worked as a student in the Fatigue Laboratory, and at the University of Minnesota, where he received a Ph.D. in Physiology in 1941. Henry became a physiologist instead of a physician due to coming down with active tuberculosis. It was a good thing for us, though I am sure he would have made a splendid, caring physician, as his father was before him. But the rigor of physiology and its tradition of asking questions molded his career; one question led to another in a life time continuity. His “old-school” training and tradition were a lesson for all of us. This is clearly exemplified in the remarkable career of his “star” graduate student, Larry Rowell.

Taylor was central in establishing Max VO2 as the standard measure of aerobic work capacity. He early found and documented the deconditioning effects of bed rest and semi-starvation. He developed a widely used standard measuring tool for leisure-time physical activity. And he was a pioneer in the study of habitual physical activity and cardiovascular health in populations.

HLT’s curiosity was disciplined, his integrity penetrating, and his example a powerful one for students and colleagues. I early saw his trait of “doing it right” the first time I took heart rates on the exercise tests we performed on the CVD Study participants in the fall of 1954.  He noted that I had recorded a heart rate of 148 bpm and asked me how I got the figure. I replied that I had counted 37 beats in 15 seconds and repeated it, getting the same number. He knew that one could not count a heart rate of 148 by counting for 60 seconds or even for 30 seconds, without losing track of the count. He wanted to assure himself that I wasn’t guessing. Henry was so honest it hurt, so honest that he questioned his own intellectual offspring, so honest that he did his darnedest to disprove his pet hypotheses. I found this one of his more powerful lessons.

HLT was one of the first to pose major questions about the role of habitual physical activity of work and leisure in health and cardiovascular risk. He looked at the question first in firemen in the fall of 1954. Another physician and I examined the 400 Minneapolis firemen that Henry had recruited in a survey of all Minneapolis stations. We had a ball, despite the heavy routine, a new experience of human biology on the scale of a whole population. And it was a particular delight because of the camaraderie among the staff of HLT, Brozek, Grande, Anderson, Nedra Foster, and the firemen themselves. I finally mustered the courage to slide down a fire pole. Henry resisted that temptation as being below his dignity, though ordinarily he was quite playful.

That particular tentative, the Minneapolis Firemen’s Study, a first look at physical activity of occupation and risk, failed for want of numbers and of a sufficient variation in activity among the largely sedentary firemen. But it was a pioneering effort in a defined population of working men under field conditions. Many of the formularies and measurements we had tested in physiological experiments and in the CVD Study, the first long-term cohort study of CVD risk, we applied in the field, from fire station to station. Many of the field procedures developed by HLT then, and with me in his next effort, the U.S. Railway Study, became trademarks of Minnesota studies; all the while, he became the most experienced and savvy field epidemiologist.

The Minnesota-Taylor way of mounting a population study went in part like this: Line up your ducks beforehand; the company, the union, and the leaders. Survey the leaders first and get them involved and behind you. Schedule carefully to avoid bottlenecks, make repeat measurements, and give attention to such human things as how long your staff can work well before they require a break.

Minnesota procedures and forms subsequently used in the Seven Countries Study internationally, were worked out during the Firemen’s Study and the Railroad Study and the Firemen’s study experience put Henry in a good position to apply to the National Heart Institute for the U.S. Railroad Study. Quite a few people around the laboratory were surprised when his application was approved. They should not have been.

Henry then systematically approached the rail companies and the railroad brotherhoods, giving them a simple and compelling vision of the study and how it would contrast heart attack risk by physical activity of rail occupations. The clincher for the unions was HLT getting the company’s agreement that the rail men could be examined on their job sites without having their pay docked, and, at my insistence, assuring them that none of the personal medical data would be provided to any company official or medical department.

Then there was HLT’s “big toy train,” the mobile lab car for the railway study. You may have visited Bandana Square in St. Paul and not realized that it is the old Como Avenue round house and repair facility of the Northern Pacific, Great Northern, and Burlington-Northern lines. HLT persuaded Great Northern to loan a Pullman car for six years of the study, and we used the railroad’s maintenance facilities there to construct that happy traveling circus. In it were three examining rooms and a large work area for the treadmill electrocardiogram and pulmonary function test, an x-ray unit, and a wet lab for processing blood and urine. The refrigerator was stocked with beer when we were on the road. Henry and Nedra and I spent many delightful hours planning and then kibitzing as this lab car was put together in the rail yards.

After a trial run at the St. Paul Depot, we hit the rails going west, hooking up to power and water at each major station and switchyard along the route. It was a first-class operation throughout. The first round had as starting survey members the following high-powered team: Joshka Brozek doing anthropometry, Paco Grande doing the dietary survey, Henry Taylor doing the standard interviews, me doing the medical examinations, blood pressure, and supervising the exercise electrocardiogram, Walter Carlson, later John Vilandre, doing the exercise electrocardiogram and pulmonary function tests, Gail Dolliff the chest x-ray, and Nedra Foster the blood work, with Martha McGowan as chief gofer and interviewer.

Reuben Berman helped us get started and to recruit local physicians to ride the rails, Bob Rothenberg, Jim Dahl, Dick Moore, Dennis Kane, and Mack Richards. John Vilandre joined us early in the second survey round. It was a great show, efficient and disciplined and fun loving. Gail Dolliff lent much of the flavor, banter, and teasing atmosphere that led the rail men to become fond of our survey and to welcome us on return trips. We hit each rail yard twice during each five-year survey round.

Henry’s experiences in the laboratory and in the field were also crucial to the 1960s development of the Diet-Heart Study, for which Taylor recruited an old Harvard colleague, rancher Stanton Fetcher, to be its Project Officer. All these experiences, in the Railroad, Seven Countries, and Diet-Heart studies, put us in a strong position at the time Ancel Keys retired in 1972. We were able to move forward and contribute to the design and operation of the major preventive trials of the 1970s and ’80s: the Hypertension Detection & Follow-up Program, The Lipid Research Centers, The Multiple Risk Factor Intervention Trial, and the cholesterol lowering drug trials, designed and carried out in collaboration with Reuben Berman and later, Richard Grimm.

When 1972 came along, and Ancel was retired, Henry Taylor was generally supportive of my becoming director of the Lab — but cautious. I remember him saying something like this: “Well, I think it’s good you’ve got this sudden-death grant, Henry. We’ll see how things go five or six years out from now.” Other than that early, not inappropriate doubt, he was completely supportive. We were off and running on the big trials that allowed us to recruit young leaders to the Lab for its larger future in cardiovascular and chronic disease epidemiology. And for the first time, we got people aboard who were formally trained in epidemiology, Ron Prineas, Russell Luepker, Richard Gillum, and David Jacobs.

In the period of a decade that HLT was with us after Ancel Keys retired, he was the Lab’s senior scientist and continued his active researches, mainly in the Lipid Research Centers Program. He and Jerry Stamler and Richard Remington with many of us on board had proposed the first multiple risk factor trial to NIH. It was called “Jumbo” because it was so huge. Their joint effort failed under a 21-person NIH review committee. But their good idea was immediately acquired by NIH staff who went ahead with an RFA for a national trial. MRFIT then happened, but unhappily not as an R0-1 proposed, to be run by Taylor and his tried-and-true colleagues.

Henry took leadership in the national Lipid Research Clinic’s operation in the field and in the analyses. Crucial from my viewpoint was his readiness to step into any administrative area where I needed his judgment and seniority, such as in negotiations with ambitious young faculty members who had their own ideas about how the Division should be directed. He mentored them, making them feel welcome and useful, and took a central role in their careers, particularly for Russell Luepker and David Jacobs.

Henry also would graciously take on needed tedious tasks such as designing our new Moos Tower space. He was project director for the complex move from the Stadium to Moos Tower, and for construction of its physiology space that allowed the activities of Art Leon to flourish. He was central to the later plans and building of our Stadium Gate 20 facility that was needed when our huge community projects got underway in 1980.

Henry Taylor was a model of what a senior investigator and colleague could be, self-sufficient yet in support of the Division wherever it needed him. And he was invaluable in the major grants we got into place in the late ’70s and early ’80s, grants that continued the strong thrust of the division, the Minnesota Heart Survey and the Minnesota Heart Health Program. Faculty recruitment for those programs brought new strengths into the division in the social and behavioral sciences, which have become a major area of research activity for us since.

Tonight we acknowledge Henry Taylor as a scientist with an intense curiosity, as a rigorous researcher, an immensely practical field worker, an astute observer, innovative experimenter, effective mentor, and valued counselor and friend. We have been fortunate to know him. We all profit still from his contribution to this division, in the building of its traditions, values, and standards of excellence. Mainly, we miss him as a loyal friend, a concerned citizen, and a delightful ol’ “salty dog!”

On May 29, 1982, the division held a symposium on the Minnesota campus and a banquet at the Science Museum of Minnesota in honor of HLT at his retirement. The program is outlined below:

Cardiovascular Physiology in Health and Disease

Henry Longstreet Taylor Banquet: “I Knew Him When” 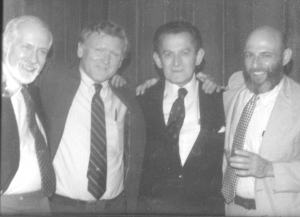