I consider Evolutionary Medicine a candidate for Elegance in Medicine, with the theory that mass modern diseases derive from the mismatch of modern lifestyles and human evolutionary adaptations from eons of survival as hunter-gatherers. I find it an elegant theory because of its simple effectiveness in transporting medical thinking beyond causes in the individual and even beyond the whole population to a broader ecology and survival of the species. As Pascal warns, however, we must be particularly suspicious of the ideas we find the most alluring, especially in  this case, which is difficult of disproof.

The following summary of my 15-year explorations of the theory, as a hobby, was presented in the Bower Award ceremony for Denis Burkitt at the Franklin Institute in Philadelphia in January 1993, having first been presented in a full treatment as the Louis Bishop Lecture before the American College of Cardiology in 1979.

[Participants and colleagues worldwide were saddened to hear of Dr. Burkitt’s death from a stroke on March 22, 1993, hardly two months after he received the Bower Award.] 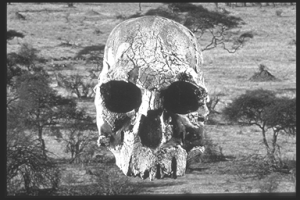 I never doubted my evolutionary origins!

“There are many humorous things in the world; among them, the white man’s notion that he is less savage than the other savages.”   Mark Twain

Forebears of modern humans were hunter-gatherers (H-G). Thus, characteristics favoring survival in H-G subsistence cultures were central to the fundamental adaptations of human evolution. The recent epidemiological transitions leading first to agriculture, then to sedentary communities, civilization, and eventually to industrialization, occurred far more rapidly (a mere 500 or so generations) than major physical adaptations can occur. It follows that modern humans remain hunter gatherers metabolically. Discordance between modern lifestyle and this H-G evolutionary legacy places serious stress on these adaptations, leading to widespread elevation of risk characteristics in affluent societies.

A general theory based on this evolutionary view states that mass modern diseases result from interactions between the evolutionarily determined species susceptibility and powerful cultural influences on behavior. A corollary follows, that unfavorable environments encourage maximal exhibition of high-risk phenotypes. Conversely, favorable population exposures assure minimal expression of the phenotypes.

Two fundamental activities of humans during the major phases of evolution, energy expenditure for subsistence and energy consumption, were qualitatively different from those in affluent society today. Evidence from fossils, from the comparative physiology of mammals, and from extant H-G tribes, indicates that the living patterns to which humans are likely best adapted metabolically include habitual diets lower in saturated fatty acids (predominantly plant foods and wild game, and their products), higher in unsaturated fatty acids, protein, complex carbohydrates and fibers, higher in minerals including potassium, and certain vitamins (ascorbate, folate), and lower in sodium, simple sugars, and alcohol. There is also evidence for alternating cycles of relative scarcity and abundance of calories and for greater work capacity and muscle strength as a result of regular physical activity, both endurance and anaerobic. Moreover, socialization, social networks, community organization, and living patterns were simple but specialized and orderly.

From this varied but frugal evolutionary legacy, the “rapid” access to perpetually abundant calories of changed nutrient composition, to sedentary living, tobacco smoking, and to other major exposures of industrial society, have resulted, so the theory goes, in the elevation of mass risk through the common maladaptations of hypertension, hyperlipidemia, hyperinsulinemia, hyperglycemia, and obesity, and factors enhancing thrombosis and oxidative reactions.

With this theory as guide, the goal of prevention today is not a Luddite rejection of modern technology or a plea for return to subsistence economies. Rather, based on these ideas, prevention seeks a broader understanding of the mass phenomena leading to Western diseases, with feasible guidelines based on attractive, time-tested traditional living patterns (e.g. the Mediterranean Diet) to reduce individual, population, and even species risk.

A strength of these ideas is the undeniable fact of the recency, in evolutionary terms, that portions of humanity departed on the path to sedentation, abundance, and civilization. Another is the substantial evidence about the nature of H-G diets and daily activities, lifestyles to which modern humans are fine-tuned by evolution. Finally, plausible mechanisms exist to account for the genetic-cultural interactions that lead to mass risk in modern society.

Other support for this species-wide, population-wide view of common diseases is found among populations now in rapid cultural transition. Changes in risk levels, both favorable and unfavorable, are observed after relatively short exposures to traditional or to industrial cultures and these are promptly followed by changes in mean population levels of risk and rates of disease.

This global reasoning and biological synthesis provides a conceptual vantage point from which modern mass diseases can be regarded and which go beyond the individual and even beyond populations to the health and survival of the species.

Limitations of the theory

But these ideas amount to speculation or, at best, teleological reasoning. There is evidence, for example, that hunter-gatherers lived short lives. Little is known about the longevity of our ancestors or of any biological advantage to long life beyond child-rearing years. Moreover, few of these concepts are amenable to experiment. A spontaneous or experimental return to subsistence patterns from affluent living patterns is rare indeed. Omnivory, and the great variety of diets and lifestyle conditions in which humankind has survived and flourished, also speak against any narrow interpretation of human diet and evolutionary legacy.

Therefore, this thesis about the role of evolution and culture, however attractive intuitively, needs further thought and testing. Quantitative markers are needed to characterize habitual diet among H-G and fossil hominids. More rigorous examination of these concepts could come from tracing DNA through major stages of human evolution, as well as from new observations of populations in transition, and, finally, from direct experiment on the metabolic and longer-term effects of changing diet, activity, and lifestyle.

Though we in industrial society shall never return to H-G patterns of living, barring a natural or man-made cataclysm, to the extent that we can understand those patterns and their differences from modern lifestyles, the better may we understand and address modern phenomena of mass risk and common diseases.