Keys and Companions Set off on an Enlightening World Tour

Ancel Keys grew up in the Bay Area of California and was schooled at Berkeley and the University of California. By chance, while in Berkeley High School, he was a subject in the formal systematic IQ testing by the pioneer, Louis Terman. Young Ancel scored at the top among a sample of 1,000 American students.

After graduate roamings to Scripps Institute in La Jolla, to August Krogh’s laboratory in Copenhagen, to Joseph Bancroft’s laboratory at Cambridge, and the Harvard Fatigue Laboratory, Keys finally found his métier in human biology in the unusual institution he established at the University of Minnesota in 1939 and called the Laboratory of Physiological Hygiene (LPH).

During a wartime tour of the United States, the noted British nutritionist, Hugh Sinclair, professor of nutrition at Oxford, visited the LPH where he was impressed with the scope of study and rigor of methods of physiogical hygiene. After the war and following the publication of Keys’s classic monograph, The Biology of Human Starvation, Sinclair invited his young American colleague for a sabbatical year at Oxford, which Keys accepted for the academic year 1951-52. By that time, Keys already had begun to look beyond the laboratory to the population and culture, which he called “mode of life,” for causes of the apparent epidemic of “executive disease”– heart attack. He also was already preaching the preventive strategies of physiological hygiene.

Keys was named chairman of the 1951 Rome meeting of nutritionists making up the new United Nations Food and Agriculture Organization, where the prime interest among European leaders was the under-nutrition and malnutrition still prevalent throughout post-war Europe. There Keys evinced his new-found enthusiasm about the “new” diseases of over-nutrition and diet-heart theories of their origins. This already “American idea” was either ignored or considered an annoyance by the serious-minded professionals preoccupied with deficiency diseases.

A nutritionist-physiologist from Naples, Gino Bergami, for one, remarked to Keys that there were few coronaries in his part of the world. When Ancel expressed skeptical interest, Bergami invited him to come see for himself.

Thus, in the spring of 1952, Ancel and his chemist wife Margaret drove with their daughter Martha across France and Italy to Naples where Bergami set them up with a laboratory and assigned them a young nutritionist assistant, Flaminio Fidanza. Margaret prepared a makeshift laboratory for serum cholesterol determinations; Fidanza pursued the diet survey. They proceeded to make a crude comparison of Italian laborers, university staff, and Neapolitan banker friends of Bergami, recruited in sufficient numbers to demonstrate statistical significance for serum cholesterol differences on the order of 10 percent among groups that differed in habitual eating pattern. Thus, Keys’s uncommon common sense led him early to the sine qua non of epidemiological design: to look first for variations among apparently contrasting, rather than obviously homogeneous groups.

The Naples results were promising. Laborers and peasants who ate a typical poor man’s Mediterranean diet of pasta, olive oil, legumes, vegetables, and wine, had lower values of serum cholesterol than the bankers who ate “high on the hog.” A quick side trip to meet colleagues in Spain and make similar comparisons was confirmatory. Then this modern-times Marco Polo was off for travel and adventure afar—in Sardinia, South Africa, Finland, Honolulu, Japan, and back home in Minneapolis. Keys returned from each new adventure with evermore engaging booty: confirmatory data and fresh ideas.

Keys also had met at international nutrition meetings a Cape Town physician, John Brock, who portrayed for him the unique population laboratory of his South African community of European-descended Caucasians, Bantu natives, and the so-called “Cape Colored” mixed-race group. Brock, with biochemically sophisticated colleagues, already had adopted multidisciplinary investigations among contrasting cultures and even had fed varied diets to Cape Town prisoners to study serum effects.

During a visit to South Africa in 1954, Keys acquired a new colleague, Brian Bronte-Stewart, who, along with cardiologist Paul Dudley White, joined Keys in world travels and an ever wider foray into hypotheses about cultural differences in diet and coronary heart disease and their mechanisms. 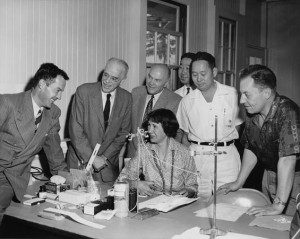 Seen here with the hospital physicians who aided their survey, Brian Bronte-Stewart of South Africa and Paul White of Boston are on the left, and Margaret and Ancel Keys of Minnesota are in the center and right.

In Japan in 1956, Keys, Bronte-Stewart, and White compared, once again, laboring miners with clerks, bankers, and professors, through introductions arranged for them by Noboru Kimura of Kurume. The trio and Margaret Keys stopped off in Honolulu on the way to Japan to visit Nils Larsen, a leading internist who recruited a casual sample of immigrant Japanese for their diet-lipid comparisons.

On their return to the U.S., Keys, Bronte-Stewart, and White descended on the Japanese Hospital of Los Angeles, from which they collected data on Japanese immigrants to California, demonstrating differences that confirmed Keys’s concepts of graduated cultural determinants of group metabolic characteristics related to vascular diseases.

Quite incidentally but significantly, this comparison of mainland and migrant Japanese led Keys to an “ecological fallacy.” Alpha lipoproteins measured by electrophoresis in the 1950s (now characterized as HDL or “good cholesterol”) were similar among the mainland, Hawaiian, and California Japanese. Beta, or LDL, in contrast, correlated with the expected diet and disease indicators. Thus, according to Keys in 1956, only LDL or beta lipoprotein cholesterol was of pathogenetic interest. Or so he thought and maintained for some time, with customary bravado. Subsequent evidence established that Keys was correct in that LDL, not HDL, accounted for population differences in total cholesterol level and CHD risk. He was wrong, however, to assume that HDL was unimportant in regard to individual risk within a culture at high risk from high average LDL cholesterol levels.

By the mid-1950s, Keys, and his expanding team of participating investigators worldwide, had demonstrated social-class differences in serum cholesterol level within cultures as well as remarkable cross-cultural differences in blood lipid levels and in eating patterns, accompanied by apparent differences in hospital-ascertained prevalence of coronary heart disease. He had rounded out that picture with the graded differences shown among Japanese on the mainland and Japanese migrants to Honolulu and Los Angeles, thereby, he believed, “holding genes constant.”

By 1954, the intellectual travel team of Keys and White had secured entry of these population concepts into the mainstream of international cardiology. They arranged for the first full symposium on cardiovascular disease epidemiology to be presented before a plenary session of the World Congress of Cardiology in the fall of 1954 in Washington, D.C. Panel members included Keys, White, Kimura, Jeremy Morris of London, Gunnar Biörk of Sweden, and John Higginson of the UK—experts who embraced clinical, laboratory, and the new population research strategies. There in Washington, the population evidence was aired for the first time en extenso before the world community of cardiological leaders. That landmark Washington symposium was later documented in a small green volume, now a rare classic, with the then-unique title: Cardiovascular Epidemiology. (Keys and White 1955) (Henry Blackburn)