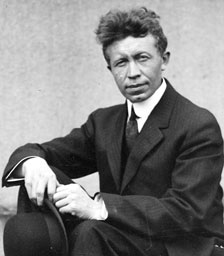 Famed Nordic-American Arctic explorer, Stefansson was born on November 3, 1879 in Ames, Manitoba to two Icelandic immigrants. He was expelled from preparatory school for “inciting a riot” among students, graduated from the University of Iowa with a BA, and, after a year at Harvard Divinity School, became a self-educated anthropologist and adventurer.

He spent two decades on Arctic expeditions and lived on the land, inserting himself into Inuit tribes for months at a time. He complemented these Arctic expeditions with Biblical scholarship about the righteousness of eating fat. He even concocted dramatic experiments subsisting on meat, including living a year, 1928, with a colleague in Belleview Hospital eating an all-meat diet purported to be 80% calories from beef and mutton fat. “Never felt better!” he reported at the time.

From the 1920s to the 1950s, Stefansson rode high as a popular international figure, lecturing, writing books, and promoting a meat-eating, Neolithic lifestyle. Along the way, and long before Dr. Atkins’ fame, he championed a series of high-fat eating patterns, including the Friendly Arctic Diet, and the Holiday Diet used in fashionable Manhattan obesity practices. His support withered and his star declined with the advent of new ideas about fats and disease.

He sought the company of Ancel Keys, Paul White, and Fred Stare, and received cautious endorsements from the two latter for his books.

He spent the last years of his life lecturing and writing at Dartmouth College and died in Hanover in 1962.

Stefansson,Vilhjalmur (1956). Fat of the Land. The Macmillan Company, New York.