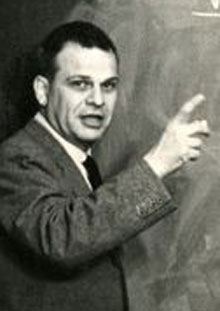 David Rutstein was a pioneer in cardiovascular disease (CVD) epidemiology and prevention in his positions as head of the cardiac division of the New York State Department of Health in the 1940s and then as Professor of Preventive Medicine at Harvard, where he helped organize and staff the Framingham Study.

He was born in Wilkes-Barre, PA and educated at Harvard College and Harvard Medical School. Rutstein played a leadership role in the American Heart Association, the American Public Health Association, and the American Epidemiological Society. His major contribution was in nurturing preventive undertakings and bringing clinical and public health leaders together in common enterprise, after which, it is reported, the problem was often to get him out of the projects he had established.

He had a national role in the organization of medical care, the integration of preventive medicine into the care of individual patients, and the measurement of medical outcomes, and was widely sought as consultant and committeeman in academic and government programs. He had little difficulty working across disciplines and for some years carried out tissue culture studies of the pathogenesis of atherosclerosis in human aortas. And he wrote such diverse books as ”Engineering and Living Systems” and ”Blueprint for Medical Care.” He lived well, traveled widely, and died of a heart attack at age 77. (HB)