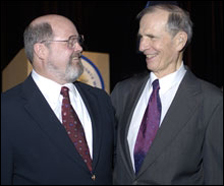 A native of Columbus, Ohio, Ralph Paffenbarger received his MD through the US Army Student Training Program at Northwestern University in 1946. He received an MPH and Dr. PH from the Johns Hopkins University in 1954. In the US Public Health Service (USPH) he worked on the transmission of polio. “The most important thing I’ve ever done is the work on the mechanisms of spread of polio and physiologically, what happens when the virus gets in, how it gets in, and learning about the viremic phase.”

After the spread of polio had been checked, Paffenbarger turned to cardiovascular disease (CVD) epidemiology. An avid runner, Paffenbarger investigated the role of physical activity in the prevention of cardiovascular disease. In 1960 he founded the College Alumni Health Study, which tracks the continuing CV health and longevity of alums of Harvard and Penn as related to their physical activity and other personal habits. His study of San Francisco Bay longshoremen, initiated in 1968, was also an influential pioneer study of occupational activity.

Testifying to Paffenbarger’s excellence in the area of contributions to research on physical activity is his Olympic prize medal for sport sciences (shared with Jerry Morris of London), won in 1996. His research shows a clear preventive benefit to physical activity. He concludes about this research: “We’ve shown without question that people of all ages, when they take up a more active lifestyle involving moderately vigorous exercise, will reduce their risk of heart disease and many other diseases.”

Paffenbarger held appointments at Stanford, Berkeley and Harvard, lived in Berkeley for most of his later career, and ran marathons until the age of 71. He eventually retired but remained actively writing. He and his wife JoAnne built a new home in the New Mexico desert where he later died suddenly after longstanding cardiac complications. (HB)