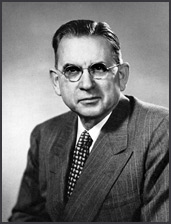 Mountin was a long term United States Public Health Service (USPHS) officer particularly important to this history as initiator of the Framingham Heart Study and the force behind development of the Centers for Disease Control (CDC). He received his MD from Marquette University in 1914 and after hospital training joined the service in 1917, rising to be Chief of the Bureau of States Services and Assistant Surgeon General. His responsibility for domestic malaria control during World War II led to his vision of CDC, which he originally thought should be at National Institutes of Health (NIH), to include all communicable diseases, their surveillance, epidemiology, and control. The epidemiological function became dominant in CDC with his appointment of Alexander Langmuir who fathered the Epidemic Intelligence Service and aggressively pursued Mountin’s view that CDC should be the central world agency for the training, laboratory services, and field eradication of infectious diseases. Mountin’s creativity, sense of time urgency, and administrative effectiveness placed him in the forefront of American public health. His innovative career was cut short by sudden death at age 61.

Neither his collected papers or biographies, nor the Framingham archive at the National Heart, Lung and Blood Institute (NHLBI), contain details about Mountin’s great foresight in recognizing the coronary epidemic and the epidemiological transition, or in his appointment of Gilson Meadors, a recent Johns Hopkins graduate in public health, as the first Framingham director, or of his conception of both an observational and interventional component to the community strategy. Mountin lived long enough to see the Framingham Heart Study, the observational part of his plan, put under the aegis of the new National Heart Institute, redesigned by Felix Moore, and well launched under the effective direction of T. Roy Dawber and a distinguished Boston advisory group. (HB)

Etheridge, EW Sentinel for Health. A History of the Centers for Disease Control, Universitiy of California Press, Berkeley 1992