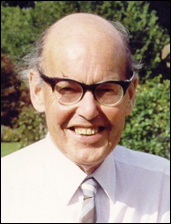 Bill Miall was an international expert on blood pressure and hypertension and a pioneer CVD epidemiologist. Miall was also a Quaker and conscientious objector and served in the Friends Ambulance Unit in Europe and Africa in World War II. He qualified in medicine at St. Mary’s Hospital Medical School in 1950 and became house officer for George Pickering at the time the latter’s views were changing the hypertension landscape.

Miall grasped the importance of studying blood pressure in real, not patient populations, joined Archie Cochrane’s MRC unit in Wales, and in the Rhonda Fach population found a graded relationship of blood pressure to heart attack and stroke. He then searched the origins of tropical cardiomyopathies in Jamaica and returned in 1971 to the UK where he continued work, including trials, in mild hypertension.

The MRC trials in mild hypertension established clear reductions in heart attacks as well as larger reductions in strokes and formed the basis of the MRC’s general practice research framework of over 1000 practices throughout the United Kingdom.

Miall ended his career in retirement and wrote a book, Mild Hypertension: Is There Pressure to Treat? (Cambridge University Press, 1987). He retired to the Lake District, where he continued as an oil painter and took up sculpture. (HB)