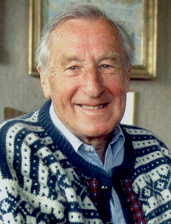 Paul Leren is important to CVD prevention research as director of the first trial of a cholesterol lowering diet in myocardial infarct patients, a project receiving worldwide interest for the method and the suggestive results.

He graduated from the University of Oslo with an MD in 1949 and trained in internal medicine and cardiology at the Ullevaal Hospital, Oslo, where he began his trial in 1957. His DMedSc Thesis entitled, “The effect of a plasma cholesterol-lowering diet in male survivors of myocardial infarction” was published in 1966.

In 1972 he became Chairman of the Oslo Study, a large population-based cardiovascular risk screening and follow-up study, and the leader of the national research group conducting clinical trials in Norway (Diet and Antismoking Trial, Hypertension Trial).

He was Director of the Medical Out-patient Clinic, Ullevaal Hospital from 1972-1990 and Professor of Medicine, University of Oslo, from 1984 until his retirement in 1990. (KP)