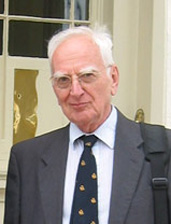 Walter Holland was educated at St. Thomas’s Medical School and took an MPH from Johns Hopkins. After service in influenza control in the Royal Air Force he studied with Donald Reid at the London School of Hygiene and Tropical Medicine. He then directed the epidemiology program at St. Thomas, focusing, with Charles Fletcher, on the epidemiology of pulmonary diseases in youth where he helped in development of the standard MRC Respiratory Disease Questionnaire. He made early contributions to standard measurement of blood pressure and pulmonary function.

Author of numerous scholarly articles and books, including co-author of Choices in Health Policy: An Agenda for the European Union (1995), he is editing an upcoming book on the development of modern epidemiology. He has been centrally involved with that development in his academic posts and research, in his function as editor of the International Journal of Epidemiology, and in a lifetime of teaching and reviews of the field. He has progressively involved himself in the analysis of health services and economics in the UK, and in the needs and strategies of epidemiology, disease prevention, and the public health internationally.

Queried on the lack of agreement between clinicians and epidemiologists on what qualifies as scientific evidence, Holland said: “The academic was concerned with experiments and that was Thomas Lewis and his disciples preached. Sharpie Schafer once said to me – and Sharpie Schafer was one of the disciples – he once said to me, ‘I don’t believe in statistics. Unless I can see it I don’t believe it.’”

Holland tells an anecdote how Pickering and Platt patched up their long rift upon experiencing a common misery in Chicago: “As you probably know, Pickering and Platt were involved in controversy and were not on speaking terms. At that time they had nearly come to blows. In the Saturday morning session Jerry Stamler told us we had all taken part in an experiment for his cookbook and that he was very grateful to us. For the entire week we had been fed on dishes from his and Rose’s cookbook.…..Anyway, the three of us got into an elevator – a lift to me and an elevator to you – to go to our rooms and I don’t know which one said it first. It was either George Pickering or Robert Platt who said, Bloody cheap, these Americans.” And that broke the ice between them and they immediately started talking away. (HB)

Holland WW. (2000). Public health–the vision and the challenge. An attempt to analyse the issues and possible solutions. Journal of Epidemiology, 10(4), 200-15.