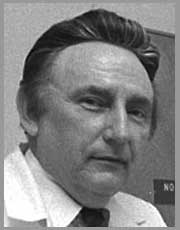 Curtis Hames, a lifelong resident of the state of Georgia, received his MD from the Medical College of Georgia in 1944 and remained in private practice in Claxton from 1947 to 1988, holding clinical appointments at Georgia and the University of North Carolina.

Hames’s great contributions to CVD epidemiology were his early recognition of the rich population laboratory of his stable community, his fundamental curiosity about ethnic differences in CVD risk, and his initiative and persistence in organizing the Evans County Heart Study, making it viable and a classic among cohort studies. It was funded by NIH from 1958 to 1995, has been a model of community-wide coverage, and is one of the more productive in knowledge about genetic, ethnic, and cultural influences on common cardiovascular diseases. The study confirmed the protective value of HDL and helped explain the “Stroke Belt” phenomenon by the absence of trace elements in the soil of the southeastern coast.

Dr. Hames remained active and involved in Evans County long after his formal retirement. He received the prestigious MacArthur Award in 1984, and had established a research award in his name at his alma mater. He was particularly admired in the CVD prevention community for his direct and folksy approach to problems, clarifying and simplifying them, and for his perpetual grace and good humor.

Please click here for a description of the Evans County Cardiovascular and Cerebrovascular Study.