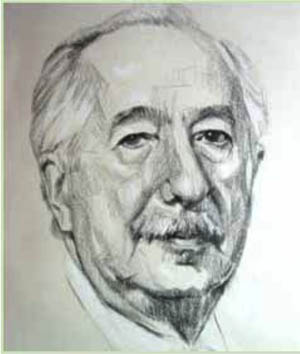 “Man first ate to survive, then to eat well, and so incorporated gastronomy into his culture. Now, moreover, he eats for health.”

“Paco” Grande Covián was born in Colunga (Asturias), Spain, to a family of physicians. Following family tradition he earned a medical degree at the University of Oviedo. As part of his medical formation, Grande was sent to the “Residencia de Estudiantes” in Madrid, where he discovered a passion for research and, under the tutelage of Juan Negrín, obtained a doctorate in physiology with high honors. It was also at the Residencia that Grande met fellow students Federico García Lorca and Luis Buñuel, among others of the Spanish cultural movement ‘Generación del 27,’ as well as his lifetime friend and colleague, future Nobel Laureate, Severo Ochoa. The Residencia cultivated in Grande a strong appreciation for broad humanistic education and a love of music. Indeed, during this period Grande and Ochoa would regularly sing operatic arias back and forth to each other while working in their adjacent laboratories, a work habit which colleagues of Grande humorously note would stick with him throughout his professional life.

Political events in Spain in the late 1920s and early 1930s, including at one point the complete closure of his university in Madrid, prompted his mentor Negrín to send Grande abroad, where Grande gained further experience at some of the leading centers of physiological research in Europe. He spent time in Paul Hoffman’s laboratory in Friedberg, Germany (where he also met and became friends with the philosopher Xavier Zubiri), in Torsten Thunberg’s lab in Lund, Sweden, and Lovatt Evans’s laboratory at the University College London, England. He was particularly marked by his year in August Krogh’s laboratory working on exercise physiology in Copenhagen, Denmark. It was there that Grande conducted his first nutrition experiment, a study in which he participated as a subject on exercise fatigue resulting from a diet rich in fats. It was also where he met Ancel Keys with whom he would collaborate closely later in life. A talented polyglot, Grande picked up the languages of each of the countries he passed through, and by the end of his life was fluent in German, Danish, Swedish, English, Russian, and Italian, in addition to his native Spanish and his mastery of written Latin.

The outbreak of civil war in Spain in the late 1930s would have a pivotal impact on Grande’s career. Grande was put in charge of a study of the prevalence of malnutrition in Madrid caused by extreme wartime food shortages. He recognized many cases as pellagra and used nicotinic acid, synthesized from a then common agricultural pesticide, to treat it. His subsequent publication of the study would bring international recognition and launch his career in nutrition. The civil war, however, also created political problems for Grande. Towards the end of the conflict, Juan Negrín assumed the role of President of the Spanish Republic. When the Republic fell and Francisco Franco assumed dictatorship, Grande’s involvement with Negrín marked him as persona non grata. For the summer following the war Grande had to hide in a friend’s country estate in Andalucía. It was there that he drafted the scientific article on the Madrid pellagra study. Even after officials lost interest in detaining “collaborators” such as he, Grande was banned from seeking a position at any Spanish university for 10 years and had to work for private labs. It was at this time that Grande courted and married Gloria Mingo, a pharmacist, with whom he would have two children. When Grande was finally allowed to seek a tenured position at the University of Zaragoza, the uncomfortable political atmosphere at the university and meager research funds made serious research prospects there unlikely. In 1952, Ancel Keys carried out an informal survey of diet and cardiovascular disease in Madrid, in which Grande provided much help, and as a result, Keys invited him to come work in his laboratory in Minnesota. The following year Grande and his family moved to the United States where they would remain for the next two decades.

At Keys’s Laboratory of Physiological Hygiene, Grande’s principal contributions were along three general lines of research: 1) the study of the effects of calorie restriction on exercise performance of U.S. soldiers, an Army-financed continuation of Key’s wartime Human Semi-Starvation Experiment, 2) the study of the effects of dietary fats on blood serum cholesterol levels, discussed in greater detail below, and 3) the study of hormonal factors in the metabolism of fats, where Grande revealed through comparative physiological experiments with mammals (dogs) and birds (ducks and geese) the critical role that glucagon played in regulating fat absorption. It was in the second of these three areas of research, and particularly Grande’s involvement in the development of the ‘Keys equation,’ where he made his longest lasting contributions to the study of cardiovascular disease. Ancel Keys, Paco Grande, and Joseph T. Anderson published a series of articles that were first to demonstrate specific quantitative effects of different fatty acids on blood serum cholesterol levels, some raising cholesterol, others lowering it, some neutral in effect.1 Through careful measurements of changes in the cholesterol level of mental health patients on strictly controlled diets, with fats varied and calories held constant, Keys, Anderson and Grande developed their equation to predict the average change in serum cholesterol level from the percentage of total calories consumed daily from polyunsaturated, monounsaturated, and saturated fats and dietary cholesterol.2 Grande played a specific role in developing specially engineered foods for the controlled diets.

In the early seventies, Grande retired from his research position in Minnesota in order to return to Spain. He referred to this retirement in Spain as his “reincarnation,” for there he was welcomed and offered a tenured professorship in the Department of Biochemistry at the University of Zaragoza and would soon become very active in revitalizing the field of nutrition in his homeland. Having returned to Spain at the end of the Franco dictatorship, and during a period of rising popular interest in diet and health, Grande became an icon in his home country. His flourishing way with words, wide breadth of knowledge, and kind, philosophical nature made him a popular guest on television and radio shows and speaker at public events and he continues to be widely quoted in Spain on matters of diet and health. Grande also spent this period bridging his career interest in research on diets and fats with some of his country’s principal contributions to gastronomy. He became an avid promoter and defender of the Mediterranean diet. Serving as Scientific Coordinator of the International Olive Oil Council of the United Nations, he launched numerous scientific studies on the health effects of olive oil. Yet his focus remained on building Spain’s scientific community. Grande became founding president of the Sociedad Española de Nutrición. He created a biochemistry degree program at his University of Zaragoza, and oversaw 18 dissertations there, cultivating a new school of nutrition science in Spain. And all of this in his “retirement.”

Grande also had a strong passion for the history of science. He would startle colleagues with his ability to recall arcane facts from the annals of science, and he regularly drew upon Claude Bernard, Antoine Lavoisier, and other historical figures in science as sources of inspiration for his research. Throughout his career Grande wrote numerous essays on the history of nutrition with the belief that such histories could serve as an inspirational means to enlist young recruits to the field. In the foreword to his biography, Grande underscored this pedagogical value of scientific biographies: “The reading of the lives of people that have contributed with distinction to one’s field of study can be a powerful stimulus and serve as an orientation for those youth whose vocation has not yet been defined. It would please me greatly if the reading of this biography would serve to awaken the interest of the Spanish youth in my field of study.”3

“Centenario Grande Covián” website for a commemorative workshop held on June 27, 2009, sponsored by the Cofradía de Colesterol: http://www.cofradiadelcolesterol.com/centenario.htm
[The webpage includes links to audio recordings of four talks that Grande Covián gave (in Spanish) on the subject of nutrition.]

Sources:
Xaq Frohlich, with help from Henry Blackburn (U. of Minnesota) and Miguel Pocovi (U. de
Zaragoza).

Xaq Frohlich, with help from Henry Blackburn (U. of Minnesota) and Miguel Pocovi (U. de Zaragoza).