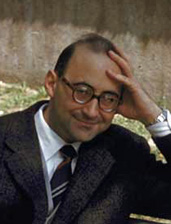 Professor Fidanza, born in Perugia, professor of Nutrition at the University of Perugia (1965-1994), graduated from the University of Naples in medicine, with post-doctoral training in Rome in nutrition and physiology. Assistant to Gino Bergami in Naples, he was assigned to work with Ancel and Margaret Keys on their first visit to explore the relationship of diet and blood lipids in early 1952, beginning a lifelong collaboration in the Seven Countries Study (SCS). After a Rockefeller Fellowship, during which he worked in Keys’ Minnesota Laboratory of Physiological Hygiene, he credited Keys with “straightening out my Italian non-scientific way of thinking,” became principal investigator of the Italian undertakings in the SCS and internationally active in nutrition science.

Fidanza’s contributions included determination of body density as a measure of body composition, characterization of the Italian Mediterranean Diet, devising quantitative dietary survey methods, and writing standard texts on human alimentation and nutrition and on nutritional status assessment. His medical colleagues in surveys admire his erudition and poetic language and also find him a martinet of discipline in the field. (HB)