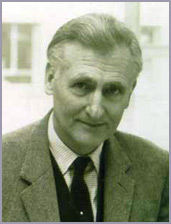 Sir Richard, pioneer epidemiologist, graduated from St. Thomas’s Hospital as MD in 1937 and served in the Royal Army Medical Corps in World War II. After a post-war period investigating asthma at St. Thomas’s he joined the MRC Statistical Unit where he and Bradford Hill carried out their classic research on lung cancer and tobacco smoking, published as the British Doctors’ Survey in 1954. That study of smoking habits and mortality among 40,000 physicians has been followed up for 50 years and shares the stage with the Framingham Study as the best known of cohort studies, in respect both to method and new knowledge contributed.

Doll became Regius Professor of Medicine at Oxford in 1969 and founded Green College in 1979. His epidemiology and clinical trials unit is now housed in the Richard Doll Building at Oxford.

Sir Richard’s productive investigations on the role of smoking, culture, and disease continued over the years, solo and in concert with Richard Peto at Oxford. They demonstrated and promulgated the method of correction for regression-dilution bias in epidemiological surveys, a major contribution to strengthening evidence. They, along with Ancel Keys, were the major proponents of cultural exposures determining large population differences in common diseases, thus, their ultimate preventability.

He studied many other conditions than lung cancer and forwarded systematic analysis of randomized trial evidence.

In a eulogy by Peto, Doll is credited with preventing millions of premature deaths. Peto described Doll’s latter years as follows: “In old age his career had an Indian summer, with a steady flow of international lectures and major scientific papers long after most people would have retired completely. Since publishing the 50-year results of the doctor’s study last year, he climbed a jungle tree in Australia, rode a camel in the Arabian desert, flew in the co-pilot’s seat in the Orkneys and gave lectures in seven different countries in five continents.”

Please click here for a description of the British Doctors Study. (HB)