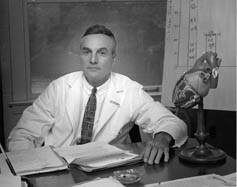 Thomas Royle Dawber began his career in the late 1930s as a clinician with the Hospital Division of the Public Health Service. He developed a keen interest in preventive medicine and believed that the doctor’s role was “primarily to see that [the patient doesn’t] get sick in the first place.”

While Chief of Medicine at the Marine Hospital in Boston, Dawber began looking for research opportunities and was led to the developing Framingham Heart Study by C. J. Van Slyke at the National Institutes of Health. As the study’s director (1949-1965), Dawber was one of its original architects and is particularly remembered for his role in gaining the good will of Framingham physicians and of participants who would return for examination time and time again, as well as for developing the productive research program of the study.

After nearly 16 years, Dawber retired as director to join the faculty of Boston University where he continued to be associated with Framingham while teaching and conducting his own research. He wrote a definitive history and summation of the Framingham Study, published in 1980. (see below) Dawber retired from medicine and lived in Naples, Florida before his death.