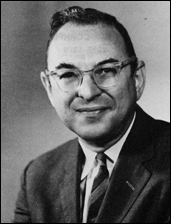 Jerry Cornfield is best known in CVD epidemiology for his development of the multiple logistic, one of the earlier versions of multiple variable analysis, which he applied to Framingham Study data.

Professor Cornfield became one of the more respected biostatistians in history and chaired the department at Johns Hopkins for a time, but held only a BS degree from NYU. He did graduate work, however, at Columbia University and at the US Department of Agriculture Graduate School. He was for most of his career an NIH statistician, working with projects in the Cancer and Heart institutes.

Cornfield demonstrated in smoking-lung cancer studies that case-control studies can be used to estimate the risk of disease as a function of smoking status so long as the rate of disease in the population is known. He also showed that the odds ratio, an approximation to the relative risk for rare diseases, can be estimated either prospectively or retrospectively.

He and co-authors Haenszel, Lilienfeld, Wynder et al. prevailed over R.A. Fisher and Joseph Berkson with arguments on the causal role of tobacco in lung cancer, put forth in their seminal 1959 paper in the Journal of the National Cancer Institute.

Cornfield became an active proponent of the likelihood principle — that statistical evidence is summarized by the likelihood function — and of Bayesian inference.

The academic community of CVD epidemiology felt it had lost its compass when Cornfield died at the peak of his contributions to the analysis and understanding of both observational and experimental studies of the 1970s. Except for his ever-present cigar, he was a fascinating leader and charming member of that community.(HB)

Marquis Who’s Who on the Web. ‘Jerome Cornfield’. Available from: http://search.marquiswhoswho.com/executable/SearchResults.aspx?db=E [Accessed 29 January 2007].