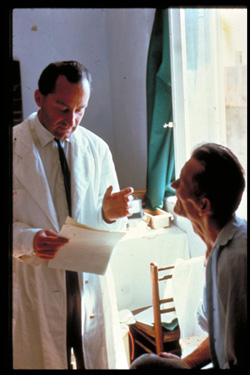 Ratko Buzina is a pioneer in nutritional epidemiology and founding principal investigator of the Seven Countries Study, directing its cohort study in Croatia.

His early career was in the University of Zagreb Institute of Nutrition followed by many years at the World Health Organization, Geneva, 1963 to present.

Buzina was the earliest to demonstrate cultural differences in nutrition and serum lipid levels among the meridional and the interior populations of the former Yugoslavia, and to pose questions about the role of animal and vegetable food fats in these differences. His personal researches included the relationship between fatty acids and coagulation and the nutritional state of the Balkans. He helped guide nutrition policies internationally as long-term expert for WHO.

He is particularly admired by his epidemiological colleagues as a superb director of field operations in the first and follow-up formal surveys of the Seven Countries Study in Dalmatia and in Slavonia in 1958 and thereafter for more than a decade. He is otherwise an athlete and a learned and charming friend and colleague. (HB)

Marquis Who’s Who on the Web. ‘Ratko Buzina’. Available from: http://search.marquiswhoswho.com/executable/SearchResults.aspx?db=E
[Accessed 28 December 2006].