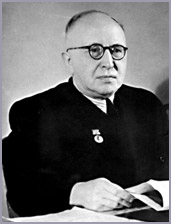 Pioneer researcher in the experimental pathology of atherosclerosis, Anitchkov was a Russian pupil of famous pathologist Aschoff (1866-1942) in Freiburg, Germany, and of Maximow (1874-1928) of St. Petersburg. He graduated from the Imperial Military Academy in St. Petersburg where he spent his long professional life. Despite the fact that he was a descendant of the Russian nobility and reportedly never a member of the communist party, he became head of the department of pathology at the Research Institute of Experimental Medicine and at the Medical Military Academy. He was president of the Academy of Medical Sciences of the USSR and held the rank of a lieutenant general in the army medical corps.

His unique researches established the use of animals in atherosclerosis research and considered virtually every question ever pursued in the field, including the specific role of dietary cholesterol, the dose and duration required to produce arterial plaque, the anatomical affinity at branching, the effect of trauma and inflammation, and even the regression of lesions after prolonged withdrawal of the cholesterol diet. He and his institute, and his student Klimov, continued to explore this experimental model into modern times and had a major effect on the concepts and methods of research in atherosclerosis, despite the long delay in full acceptance of its important environmental origins. (HB)