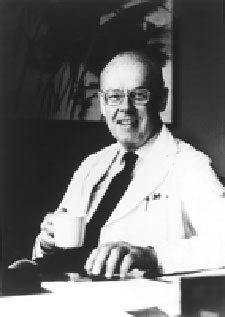 Edward H. “Pete” Ahrens, Jr. was a noted clinical investigator at Rockefeller U. where he was among the first to find different effects on serum cholesterol level of fatty acids with different degrees of unsaturation. His experiments were small-scale and rigidly controlled in a metabolic ward, with liquid formula feedings. Because of his leading position in clinical science and nutrition he was tagged for major NIH review functions and task forces, including heading the committee that reviewed the positive recommendations for a national trial by the Diet-Heart Pilot Study group.

Ahrens was born in Chicago, IL in 1915, and educated in the humanities at Harvard College, and in medicine also at Harvard, graduating in 1941. He left the Columbia-Presbyterian program in pediatrics for wartime service with the Air Force Medical Corps and returned to NYC where he worked with Donald Van Slyke’s Rockefeller laboratory in chemistry. On completing his pediatric residency he returned to Rockefeller where he remained for 45 years in clinical laboratory research while attending at Cornell and New York Hospital. His work was heavily in nutrition and biologic chemistry and blood lipids.

Ahrens was the prototypical clinical investigator with active relations in the American Society for Clinical Investigation and FASEB and as head of the NIH Study Section on Metabolism, and was founder and first editor of the Journal of Lipid Research. He maintained close collaboration with his 70 doctoral students and other clinical investigators worldwide.

His position was always firmly academic and resistant to making public health recommendations in the absence of experimental “proof,” whether or not it was possible to obtain such proof. His negative influence on public health approaches, based on weighing best evidence, was a powerful deterrent to diet advice for the public for some decades. On the other hand, his metabolic studies of diet were generally regarded as trail-blazing, elegant and irrefutably precise. Only Ancel Keys refuted them not for their design but because they involved liquid formulas rather than real foods.

Through the many years of his powerful influence he maintained the classic academic view that we knew too little, and that with too much uncertainty, to make general recommendations on diet or other lipid-lowering strategies in the prevention of atherosclerosis. Meanwhile, he trained numerous investigators who developed the very evidence he felt insufficient and who led in such interventions (John Farquhar; Scott Grundy, Bill Insull, et al.).

He actively pursued his hobby of horticulture and built an arboretum at his summer home in the Catskills where survival of trees in northern climes was the major project.

One of his longest associates at Rockefeller, Jules Hirsh, eulogized Ahrens’s research, teaching, and humanity, and also confirms our experience of his scientific views, which he expressed somewhat differently than we do: “Although he was well known as a major contributor to the diet-serum lipid-atherosclerosis relationship, he objected to popular simplifications that would lay all coronary artery disease at the doorstep of diet. Some thought him to be obtuse or stubborn, as he refused to endorse claims that changing our diets by lowering cholesterol intake would be the sole and most effective weapon to win the battle against heart disease. He was indefatigable in pointing out the necessity of additional clinical research in human subjects to delineate individual differences in response to diet.”(Hirsch 2001).

Ahrens’s biographers conclude that “His career has been marked by not only industry, but by innovation and a deep sense of honesty and directness in all of his contacts.” He was indeed direct, and held to the end that ever more research was required before rational dietary recommendations toward prevention of mass diseases might be offered the public. He was aghast at the positions, policy, and preventive programs of NHLBI and the American Heart Association. (HB)