“He has all the virtues I dislike and none of the vices I admire.” Winston Churchill

In the summer of 1977, at the Bohemian Grove, I heard a magnificent presentation on the theory of plate tectonics early in its development, by South African oceanographer-genius-curmudgeon, Athelstan Spilhaus. He described the drift of continents from the original Gondwana (Pongea) unity to their present configurations, all of which were predictable except for Australia, which was, and is, some 30 degrees off course prediction.

Similarly, I know people who one might say are 30 degrees off predicted course. Usually they are original and stimulating and most worthy of attention. Off hand, I think of Stoney Stallones, a clever character, prolific in thoughts carried back from wanderings in the wilderness, and at least 30 degrees off prediction. Other admirably positive characters in this vein come to mind, including Lew Kuller and Ancel Keys, along with original folks having an equal but opposite and negative bent. Then is when I think of George Mann.

An amusing interchange between George Mann and me occurred in 1975 in the Letter pages of the New England Journal of Medicine, reprinted here from the April 3 issue. Mann’s letter is typical of his communications; personal and slashing:

“There is a third world that Blackburn does not acknowledge in the binary system of thought that he uses to describe the problem of coronary heart disease (N Engl J Med 292:105,1975). Those with what he calls the “academic view” comprise the lipoprotein-phenotyping contingent, who in effect say, “Give us more time and money and in the meantime phenotype everyone, even babies, and send off to Washington for the appropriate diet manual.” This looks to me like busy work – not problem solving.  In the second world — where Blackburn lives in a large, circular, stone edifice — are those who like to call themselves pragmatists in these health matters. They violate the first premise of good medicine because they treat symptoms, not disease. Their facilities hum with patients being measured and treated for one or another risk factor (a glossy new term for an attribute associated with coronary disease) even while they studiously ignore the stark fact that no one has been able to show that treating one or all of these risk factors does any good, although some of the treatments do some harm.

In the third world, small and less well known, where I live, we

A common feature of each of these three worlds is industrial muscle. Segments of the food and pharmaceutical industry find diet, hypertension and hypercholesterolemia very profitable disorders. Unfortunately, the sneaker-and-supporter crowds have been slow to organize. It is a commentary on our system of science that, until they do, the necessary clinical trial to examine the role of exercise in protecting health will not be done. In the meantime, anyone with even a scrap of evidence that the phenotyping of lipoproteins or the consumption of an oily, low-fat diet helps protect health should send it at once to Dr. Blackburn — even a little clay suitable for chinking his wall would help. It will be a long winter in Minnesota.”

“The above letter was referred to Dr. Blackburn, who offers the following reply:

A short time after this exchange, in a gesture of reconciliation, I  requested a reprint of an article Mann had published in Circulation, which I had found particularly thoughtful. My query was immediately answered with an autographed reprint bearing the following handwritten, wholly gratuitous slap in the face: “To Henry Blackburn, the trumpeter who faces the rear of the column!” [It smarts even now, though perhaps his characterization is not that much off course!] 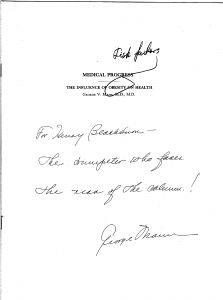 Some years later, George Mann published his memoir, The Way it Seems, illustrative passages of which are excerpted and quoted here:

The critical strategy of my career has been my opposition to what has come to be called ‘diet-heart theory.’ By opposing this I have been denied research funding by the National Institutes of Health, the American Heart Association, and other important foundations.

Goffman’s [sic] hypothesis was at first ridiculed by Professor Ancel Keys but later adopted by him and his cronies. Keys used carefully selected data of the World Health Organization to boost his argument. [To the contrary, Keys et al. collected careful data in  seven countries that confirmed the hypothesis.]

I challenged diet-heart and I have continued to do that. As a result I am unpopular with program planners and must obtain funding in bits and pieces where I can. University administrators and the biomedical faculty see me as a kind of pariah because half of every NIH grant goes to what is politely called ‘overhead’ that is to the use of administrators who build their own little Balkan empires, decorate their offices, and attend committee meetings. Still, if I were back in 1962, I would do it the same way again, because to support diet-heart with all its easy money would be a deceit.

Saturated fat and cholesterol in the diet are not the causes of coronary heart disease. That myth is the greatest scientific deception of this century, perhaps of any century. One day the true cause of CHD will be found and the disorder will be prevented. When that happens Keys and his cronies will be exposed. 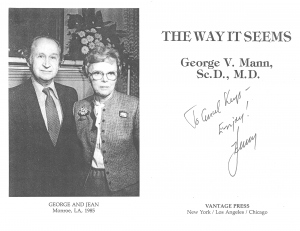 Such companies as Proctor and Gamble [sic], Corn Products International, Anderson-Clayton and Standard Brands made huge profits by selling their products with health claims. While such claims are in violation of Federal Trade Commission law, the practices were never challenged — such was the muscle of the industrialists and their scientific patsies. [You may imagine Ancel Keys a patsy. I can’t.]

Until lately I supposed that Virchow led the list of five medical rascals. Now I am not so sure. Since the 1960s, when Ancel Keys took up the proposition originated by others that heart attacks are caused by eating saturated fat and cholesterol, dozens of expensive and elaborate trials have failed to support that contention, but the notion is still promoted by Keys, J. Stamler, H. Blackburn, and a band of Keysian sycophants. The damage is done not so much by the false treatment advisories as by the exclusion of the possibility of finding proper preventions for coronary heart disease, so long as the Keysian myth persists. Keys and his crowd need a long visit to the confessional.

The so-called [NIH] study section system of reviewing research applications is a stacked deck. Believers are supported, nonbelievers are not.

. . . it seems to me the old Creole saying is true, ‘If you’re silent among brigands then you are brigand.’ In 1969 [therefore], I blew the whistle on Darby’s Egyptian experiments and they were soon stopped. [Bill Darby was a Vanderbilt colleague of Mann, who studied iron-hemoglobin metabolism in pregnant women using tiny doses of radioactive iron.]

A Pox on Thee All

. . . there is a blight on the ivy halls these days. Pseudoscientists compete like pawnbrokers for patients, for grants, for patents, and publicity. Oncologists promise cures they cannot produce, surgeons slash and brag, and the pharmaceutical companies promote analgesics with horsepower races even as those drugs cause ten to fifteen percent of all end-stage renal disease. When science is distorted in these ways, it is not science, it is a manipulative, profiteering business. Hospitals, even ours, now have marketing divisions. There are people circling over our citizens like carrion birds dropping down on the sick and the lame.

George Mann, eccentric philosopher-scientist, leaves us finally with this observation to warm the cockles of every heart:

Biomedicine has become an obscene place and I for one am glad that I am about to leave it. A challenging intellectual and humanitarian profession has been turned into a crass, commercial enterprise. In my youth, patients went to physicians and hospitals for help. Now they find business enterprises built around the Faustian proposition, your money or your life. The odds are good that they will lose both.

Dr. Mann may be right!