At the same period of the late 1950s when investigators in Minnesota were testing observer variation in ECG reading (while preparing the Minnesota Code for classifications in population studies), Ian Higgins, in Archie Cochrane’s MRC Pneumoconiosis Unit in Cardiff, became similarly involved in characterizing ischemic heart disease in their population laboratory, the Welsh valley of Rhondda Fach. In preparation, Higgins submitted ECGs of a random sample of middle-aged men to four “distinguished cardiologists” in various parts of the UK, asking them: 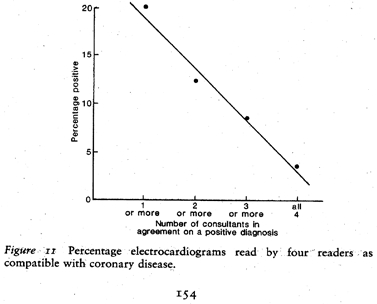 Based on results seen in Figure II, Cochrane satirically remarked that: “In fact it appeared that if one had involved a fifth interpreter there might well have been no finding on which all observers would have agreed. It would have been an interesting example of disease elimination by multiple observations!” (Cochrane and Blythe 1989, 153-154) [During this period, working on these issues, Ian Higgins made increasing connections with the USA, in Minnesota, Framingham, and Pittsburgh, which eventually influenced his decision to move to the U.S.]

In his autobiography, Cochrane spoke of this period of his own epidemiological work in Cardiff: “as well as being the happiest, this was very likely the most productive period of my life. I think I showed that we could, very nearly, make measurements in communities with roughly the same known error that one can make in laboratories and use them to test hypotheses” (ibid.). Thus, an early leader in chronic disease epidemiology saw independently the opportunities, developed the needed concepts, questions, and methods, and tested them in representative samples of whole communities, making him a pioneer and founder of CVD epidemiology. (Henry Blackburn)